Water storage tanks mounted on the roof of every house are a distinctive sight throughout the length and breadth of Palestine. Without a guaranteed source of water, life is not possible in this beautiful, yet arid land. 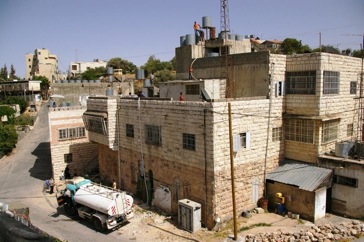 Since 1967, when it came under Israeli military occupation, the southern city of Hebron (Al Khalil) has been particularly affected by water shortage issues. These shortages and interruptions of domestic water supplies are invariably caused by direct military intervention. In the case of certain households (where the properties abut illegal Jewish settlements and are under particular threat of expropriation) supply is limited to two days per week. The luxuriant trees and lawns which are a feature of the nearby settlements are testament to their cheap and plentiful water supply.

When water is denied to the indigenous inhabitants of Hebron they often have no recourse but to buy water from the Israeli settlement of Gush Etzion to the north. This is yet another iniquity and humiliation for a people who have suffered under a sometimes brutal military occupation for the past forty one years. 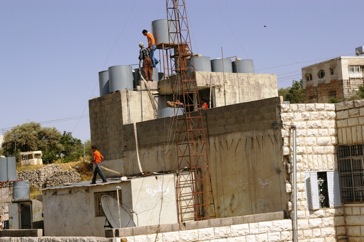 For the past month the Palestinian neighbourhood of Tel Rumeida (designated as an area under direct and exclusive Israeli military rule, unlike the rest of the city) has been without a water supply. By denying the passage of repair equipment through check points under its control, the Israeli army has prevented municipal workers from repairing a broken water pipe. No reason has been given for these actions and one can only conclude that it is a form of collective punishment for the Palestinian population which continues to live in this area.

In Tel Rumeida approximately 500 Jewish settlers (described elsewhere as “the worst of the worst”) are embedded amongst the local population, protected by a force of over 3,000 Israeli armed forces personnel. Their aggression and fanaticism are legendary. The author has seen a sign spray-painted on a Palestinian home which reads, “Watch out Fatima. We will rape all Arab woman (sic).” Settler children routinely harass and attack Palestinian children on their way to and from school. Needless to say, the water supply to these settler enclaves has remained unaffected.

As water supplies dwindle, life has become increasingly uncomfortable, approaching desperation, for the approximately 350 to 400 Palestinians living in Tel Rumeida. A local ISM member, by negotiating between the Hebron Municipality, the Red Cross and the army of occupation, has managed to gain permission for emergency water supplies to be delivered by tanker to many of the affected families, thus staving off a possible crisis. This, however, is only a short-term and interim solution to the problem. Hopes are held that the Israeli army will allow the broken water pipe to be repaired in the near future.