Today, once again, the Israeli military lied to its citizens and the rest of the world. 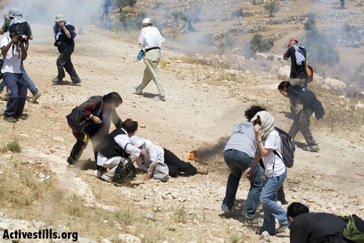 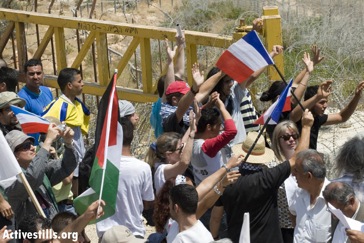 In the YNet article about the weekly non-violent demonstration against the apartheid wall and the illegal Israeli occupation in Bil’in village located near Ramallah in the Occupied West Bank, the Israeli military claimed that “about 70 Palestinians and left-wing activists took part in the protest and hurled stones at security forces, who used crowd dispersal means in response”. They went onto state that the IDF “regretted the fact that ‘week after week large numbers of security forces need to deal with Israeli rioters, who turned public disturbances into a regular occurrence’. 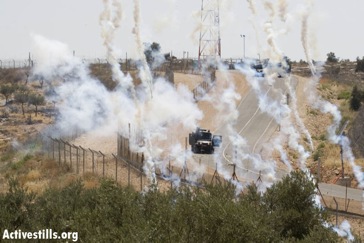 As a non-violent and peaceful participant in this demonstration, I completely dispute these claims made by the Israeli military. For the past three years, Bil’in village, has become a model for non-violent demonstrations against the wall and Israeli occupation. This week’s demonstration took place at the end of the 3rd annual international non-violent and grass roots resistance conference held by the village. The conference which went for three days attracted well over 150 participants, the great majority from around the world. It also had the support from across the Palestinian political spectrum, including the Palestinian Authority. 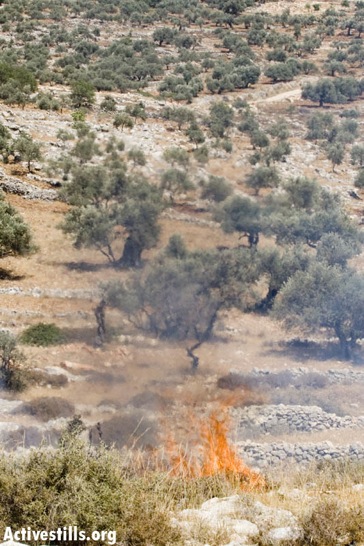 At the conclusion of the conference and prior to the weekly demonstration, a friendly football (soccer) game was held about half a kilometre from the wall. The match was between teams made up of Bil’in residents, Israeli anti-occupation activists and international solidarity supporters. While the match was taking place, a few Palestinian teenagers from the village approached the wall but they did not throw stones. From the other side of the illegal apartheid fence, Israeli soldiers were stationed on a hill and they immediately began firing tear gas at the children. The football match came to a quick end as the wind carried the teargas across the field, causing some players and spectators, including an elderly Palestinian man, to collapse. 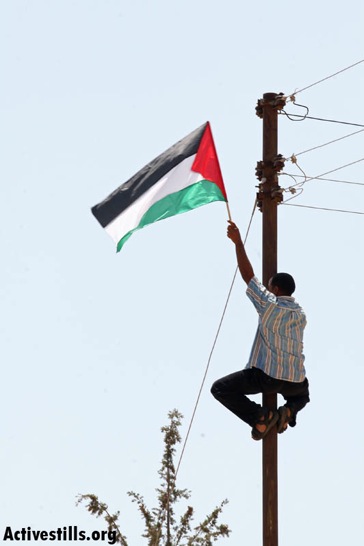 The conference participants who were at the football match regrouped under a tree. Shortly, we were joined by many of the residents of the village who at the end of Friday prayers, marched to football field. The villagers were joined by around 30 Israeli anti-occupation activists. 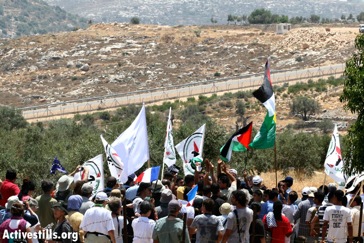 More than 200 people, not 70 as the Israeli occupation forces claim, took part in the peaceful, non-violent demonstration. We marched from the football field, down the wadi (valley) to the illegal barrier. The Israeli Occupation Forces were stationed approximately 50 metres away, behind concrete barriers on the opposite side of the road, behind the illegal apartheid fence. We stood standing and clapping peacefully. As we stood there, the conference declaration, which highlighted the necessity for non-violent struggle against the illegal Israeli occupation was read out. 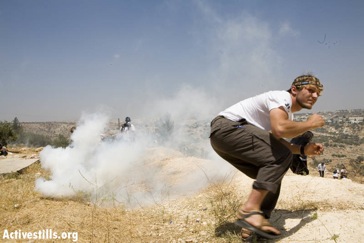 Participating in the non-violent, peaceful demonstration were the Vice President of the European Parliament Luisa Morgantini and Irish Nobel Peace Prize Laureate. Mairead Corrigan-Maguire, as well as a delegation of Italian law makers, along with delegations from France and other European countries. While there were a considerable number of young people in attendance, in reality the great majority, who were from the various international delegations, were aged between 45 and 60 years. Throughout the demonstration, we – the demonstrators – repeatedly held our hands up in the air – palms open – towards the soldiers, who clearly see us, to show we were unarmed and peaceful. No-one from the crowd threw stones at the soldiers, no-one was armed and there was absolutely no threat to the Israeli military by our presence. However, despite this, the Israeli military opened fire, directly into the non-violent peaceful crowd, with no warning.

Under Israeli law and under Israeli military regulations, Israeli soldiers are not allowed to fire directly in to crowds who pose no threat to their safety. According to Israeli military regulations, a solider must only use a weapon in the event of immediate “danger to life,” and when it is impossible to effectively defend one’s self from the assailant other than by the use of the weapon.

In 2000, a report issued by the Israeli based Physician for Human Rights (PHR) revealed, however, that the Israeli military consistently violate Israeli law and their own regulations on a regular basis. According to PHR, the Israeli military use “live ammunition and rubber bullets excessively and inappropriately to control demonstrators, and that based on the high number of documented injuries to the head and thighs, the soldiers appear to be shooting to inflict harm, rather then solely in defense”. The PHR’s analysis of fatal gunshot wounds also revealed that approximately 50% of them were to the head, revealing that the Israeli military were specifically aiming at people’s heads. In addition, they also noted that there were numerous head and eye injuries as a result of “rubber and rubber coated steel projectiles” [ie. rubber coated steel bullets] which revealed the “frequent misuse of these weapons, such as firing at a range of less then 40 metres at the upper part of the body”. As a result, PHR noted that the events on the ground showed that the Israeli military not only violated their own regulations but it was “allowing soldiers to fire when they were not acting solely in self defense” [2]

Over the past four years, during my various stays in the Occupied West Bank, I have regularly witnessed the Israeli military open fire on and into crowds of unarmed, peaceful demonstrators. At the last Bil’in demonstration that I attended approximately four weeks ago in May, the Israeli military also opened fire directly into the peaceful, non-violent demonstration. At this demonstration, however, they were also using rubber coated steel bullets and live ammunition. Although I have been in demonstrations in the Occupied Palestinian Territories where rubber bullets and live ammunition has been fired at the crowd before, this was the first time I had ammunition fired directly towards me. 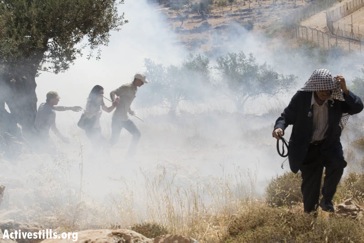 In 2004, at a peaceful, non-violent demonstration in the village of Budrus, against the apartheid wall, I was hit with a teargas canister fired by the Israeli military from a distance of around 150 metres. At the time, myself and others, were attempting to lift a young Israeli woman, who was an amputee with a prosthetic leg, into an ambulance. She was injured when she attempted to protect a group of young Palestinian girls, who the Israeli military opened fire on. The young Palestinian girls had simply been clapping and chanting slogans against the wall.

As we lifted the Israeli activist into the ambulance, I was hit in the upper thigh by a super-heated teargas canister traveling at high velocity. Despite wearing jeans, I suffered burn scars and intensive and deep bruising, which was around 30 centimetres in diameter. For more than a week after being hit by the canister my entire body was in acute pain, as it went into shock from being hit with such intensity. At the time, I was extremely grateful that I was not hit in the head by the canister.

Today, however, myself and my IWPS team mate, just avoided being hit by super-heated, high velocity teargas canisters being fired directly into the crowd at chest and head level by the Israeli military. One canister went whizzing by me like a missile and hit in the head an older European man who was about 4 metres in front of me. I saw the teargas canister hit him in the head and his hands fly to his head in order to protect himself. I later found out that the man was the Italian judge, Julio Toscano, mentioned in the Ynet article. Other non-violent demonstrators were also hit.

As people started to regroup and move back to try and aid those who were injured by the Israeli military’s barrage, soldiers once again began firing into the unarmed and peaceful crowd. Again teargas canisters went whizzing by me at chest and head level. My team mate was hit in the back. Luckily she was wearing her back pack which took the intensity of the hit. The bag, made of nylon, however, was visibly damaged and melted due to the impact of the canister.

Kim Bullimore is currently living the Occupied West Bank, where she is a human rights volunteer with the International Women’s Peace Service (www.iwps.info). She has a blog www.livefromoccupiedpalestine.blogspot.com and is a regular writer on Palestine-Israel issues.

[2] Physicians for Human Rights (2000) Evaluation of the use of force in Israel, Gaza and the West Bank