On the 28th June, ten international and Israeli peace activist accompanied farmers in Shaab el Butum, south of Hebron. The Palestinian farmers are threatened by severe violence from settlers and are asking for international presence. 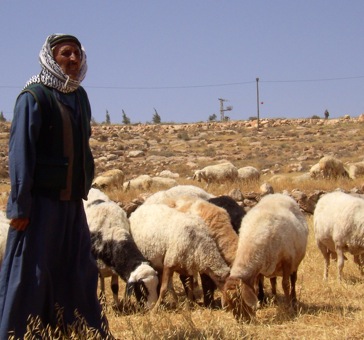 The villagers of Shaab al Butum have been troubled by settler violence for a very long time. On Wednesday 25th two Palestinian shepherds were beaten by settlers while working in the fields with their sheep and goats. Now they are asking for international presence as they are worried about further settler violence.

This week they were joined by a group of international Human Rights Workers (HRW’s). The group joined the shepherds to take their sheep to their land close to the illegal Israeli outpost Mitspe Yair, where the two attackers from Wednesday had come from. The settlers, guarded by soldiers, watched the group from a distance but did not interfere this time.

Shaab alButum is part of a Palestinian area surrounded by settlements, outposts and military practice fields. The Palestinian families in the area lives scattered in tents and caves. They have several times been forced away from their homes by violence. Because of settler violence many families have left the countryside and fled to the city of Yatta. The Palestinians are still struggling for their right to stay on their land and determined not to give up after for the violence.Recently some families have returned from Yatta to their land. Shaab al Butumis close to Susiya where there was a brutal settler attack on the June.