Demonstration in Shufa in protest against Israeli apartheid road

Over 100 residents of Shufa turned out at 5pm on Saturday 7th June to protest against the Israeli apartheid system that denies the villagers the right to use the main road of their village. 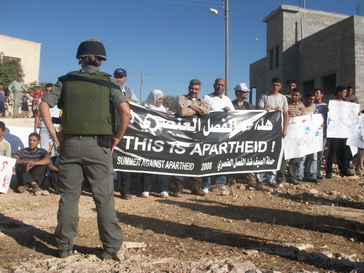 Bearing a banner that read: “This is Apartheid”, and hand-drawn placards entreating “don’t kill peace”, villagers marched towards the apartheid road in a continuation of the series of demonstrations against the closed road, despite the assurances from the Israeli army commander that if they were to call off their demonstration the road would be opened the following day. 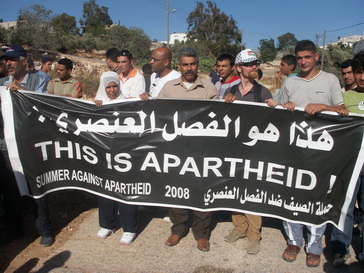 Israeli soldiers quickly entered the village from the nearby army base (built on stolen Palestinian land), and surrounded the demonstrators, preventing them from reaching the road. Protesters stood and chanted “1,2,3,4 Occupation No More!” before negotiating their way closer to the road upon which they have not been allowed to drive for the past three years. 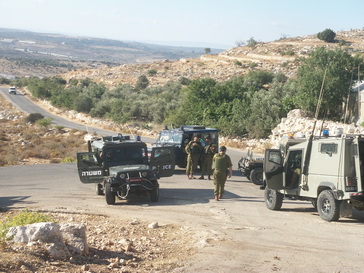 The road, however, is available to settlers from the nearby settlement of Avne Hefez, a “weekend” settlement built in 1985 – the reason the villagers are denied their freedom of movement. Up until 18 months ago, residents were not allowed even to walk on the road. The apartheid system also denies the upper part of the village electricity and phone lines, despite being located just 200 metres from power sources. Villagers are forced to rely upon a diesel-powered generator that functions just three hours each day, costing three shekels per kilowatt – six times the cost of electricity elsewhere in Palestine. 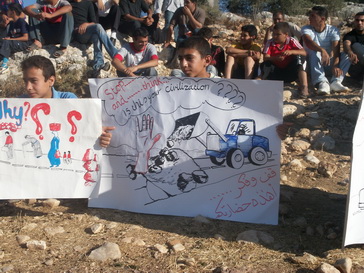 During negotiations, soldiers advised demonstrators to finish their protest by 6:30pm. Protesters refused, saying they would not leave until all the soldiers withdrew from the area, including the two who had occupied a nearby house. All of the demonstrators sat down to show their refusal to move, and started singing defiantly “this is apartheid” in Hebrew, and remained by the road until all soldiers had left. 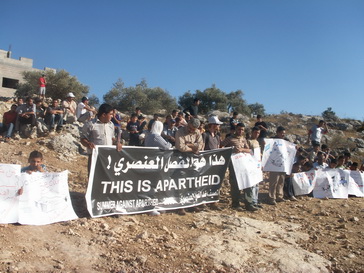