New
Home / In the Media / PCHR: Narratives Under Siege – Swimming in Sewage

In order to highlight the impact of the siege and closure of the Gaza Strip on the civilian population, the Palestinian Centre for Human Rights (PCHR) is publishing a series of “Narratives Under Siege” on the PCHR website. These short articles are based on personal testimonies and experiences of life in the Gaza Strip, and look to highlight the restrictions, and violations, being imposed on the civilians of Gaza.

——————
Narratives Under Siege: Swimming in Sewage 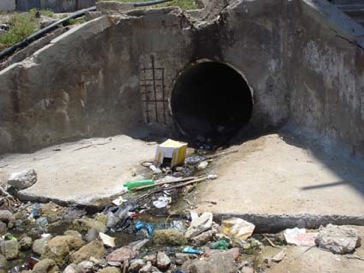 “I think the sea probably is polluted. Sometimes I get strange white marks on my skin; but we come down to the beach every day because we have nowhere else to go.” Samer and his friends are hanging out on the beach in Gaza city, next to the old fishing harbour, and just about to jump into the sea. One of the boys holds a plastic bottle with several small fish and a tiny crab trapped inside. The fish are all dead. Less than a hundred metres away, a sewage pipe pours mucky water into streams of dark waste that flows towards the sea where Samer and his friends swim.

Summer is intensely hot in the Gaza Strip, and families flock to their local beaches en masse. But on some beaches, bathers are now, literally, swimming in sewage. According to the UN Office for the Coordination of Humanitarian Affairs (OCHA), since January this year, 50- 60 million litres of untreated and partially treated sewage have been poured into the Mediterranean Sea surrounding the Gaza Strip every day. “This sewage cannot be treated due to the lack of a steady electricity supply within the Gaza Strip” says a recent OCHA report on Gaza sanitation. Hamada Al-Bayari works for the Gaza OCHA office. “We’re very concerned that the sea is becoming dirtier and more contaminated because of the chronic shortages of fuel and spare parts” he says. “Gaza’s sewage treatment plants urgently need fourteen days of uninterrupted power in order to run a proper sewage treatment cycle, for the sake of Gaza’s public health.”

The Gaza Coastal Municipal Water Utility (CMWU) is responsible for providing drinking water across the Gaza Strip as well as managing Gaza’s three sewage treatment plants. Due to ongoing chronic shortages of electricity, fuel and essential spare parts, unfiltered tap water is saline and undrinkable throughout the Gaza Strip, and none of the sewage treatment plants are functioning normally. CMWU have recently been forced to increase the volume of raw and untreated sewage being dumped at sea to around 77 million litres per day, to avoid flooding densely populated residential areas, like Jabalia refugee camp in northern Gaza, where 3 million litres of raw sewage recently had to be pumped into a flood water lagoon. Despite last week’s signing of the Tahdiya, or ‘Calming’ between Israel and Hamas, normal fuel supplies have not been resumed, and CMWU has less than a third of the fuel it needs to run a full sewage and waste water treatment service in Gaza. Meanwhile, Israel has severely restricted the entry of essential spare parts for Gaza’s sewage and waste water treatment plants since July 2007.

There is now widespread concern about the state of the Gaza Strip Mediterranean Sea. The World Health Organization (WHO) recently took samples from 30 Gaza Strip sea shore sites, and tested them for human faecal and animal faecal contaminants. Thirteen areas covering seven beaches along the Strip, were identified as polluted and unsuitable for swimming, including three beaches along the central and southern Gaza Strip and four beaches in and around Gaza city. The beach next to Gaza harbour where Samer and his friends swim every day, is one of them.

WHO has warned that, “Waterborne outbreaks are particularly to be avoided because of their capacity to result in the simultaneous infection of a high proportion of [the] community.” These outbreaks can include gastroenteritis, ear infections, dermatitis, dysentery, respiratory and urinary tract infections, eye infections, guardia and strains of e-coli. WHO health guidelines suggest that water borne pathogens are one of the world-wide causes of death and disease, and like OCHA, the organization has reiterated that Gaza’s sewage treatment plants urgently need upgrading, and need more fuel.

“These restrictions are a clear violation of the universal right to health and the right to a clean environment” says Khalil Shaheen, Head of the Economic and Social Rights Unit at the Palestinian Centre for Human Rights (PCHR). “Under international humanitarian law, Israel, as an occupying power, is obliged to facilitate access to all amenities. Access to clean drinking water and sea water are nothing more than basic human rights.”

This recent research on the quality of Gaza’s seawater does not suggest any immanent deadly threat to public health: but the fact remains that Gaza’s sea is dirty and contaminated because the Israeli Occupying Forces (IOF) are denying Gazans the means to clean up their own sewage, and no-one yet knows how serious the health risks are. Collective punishment of a civilian population violates international humanitarian law, but Israel is blatantly continuing its violations, and now Gaza’s tap water is undrinkable, and its sea water increasingly unfit to swim in. The June 19 Tahdiya was signed in order to cease hostilities between Israel and the Gaza Strip, and eventually end the siege of Gaza. But to date, the crossings remain closed, and Gaza’s most basic amenities, like its sanitation services, are literally being stretched to breaking point.