A 9-year-old child was injured in a demonstration in Far’un near Tulkarem, on Tuesday 24th June. Approximately 100 activists from Tulkarem joined residents of Far’un in the demonstration against the apartheid wall and the house demolitions ordered as a result of its construction. 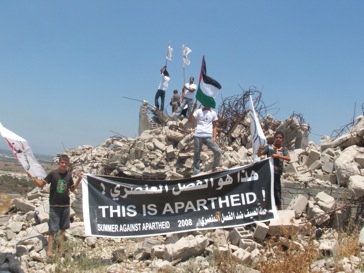 Demonstrators marched to the two currently threatened houses, bearing a banner that read “This is Apartheid!”, as well as Palestinian and party flags; and chanting “No! No! to the wall!” and “This wall must fall”. Members of the Struggle Front party gave speeches, before protesters marched to the houses that had already been demolished because they stood within the arbitrarily implemented 200m “security buffer zone” – despite the fact that the houses were built long before the wall. Children attached flags to the razor wire on the wall, in defiance of the Israeli signs warning of mortal danger. 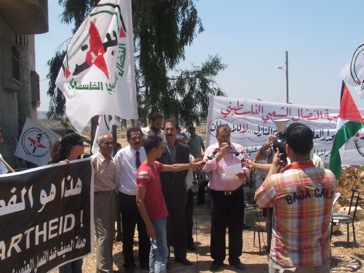 After approximately 20 minutes, one Israeli jeep arrived on the military access road beside the wall – a double fence topped with razor wire here – and fired a single rubber-coated steel bullet at the demonstrators as they marched to the demolished house closest to the wall. The bullet was illegally fired from only 20m away, aimed for the head of an elderly man, who ducked just in time. The bullet then ricocheted and struck 9 year old Mohammad Abdel Kareem Salim Bdeir in the leg at high speed, creating a large welt on his inner thigh. 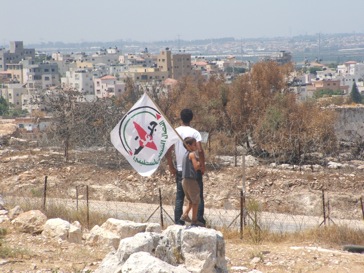 The young boy was treated in the nearby school, after which the activists continued their demonstration – highlighting the apartheid nature of the wall and the demolitions. Many Israeli jeeps and an armoured personnel carrier (APC) arrived as the protest was coming to a close. The jeeps then however entered the village, blocking the path of the bus that was carrying the activists back to Tulkarm, and surrounding it with soldiers on foot, who would not move until human rights workers started photographing them. 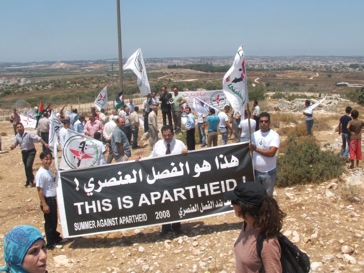 The two threatened houses both lie within 50m of the apartheid wall, and despite the fact that they were built in 1998, 6 years before the wall was constructed in the Tulkarm area, they have been declared “illegal structures” by Israeli authorities. The owners were issued with demolition orders – ordering them to demolish their own homes by 3rd February 2008, or else face destruction at the hands of Israeli bulldozers. The orders constitute no idle threat – 8 other homes nearby have been demolished – two in 2003 and six in 2007. Another nearby house has received two letters of warning advising the owners to demolish their home – the next communication they receive will be advice of imminent Israeli destruction. Also under threat is the local boys’ primary school – half of which is within the 200m “buffer zone”. 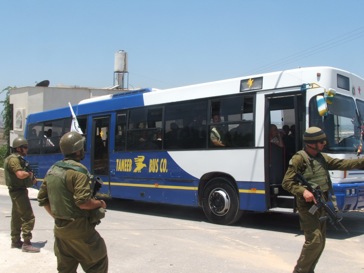 The owners of the threatened houses joined together in February of 2008 to fight the demolition orders in court, but their case has failed. Concerns have arisen within the community as to the wisdom of taking the case to the high court – the next possibility in the legal battle – for fear of setting precedence if they lose – as has happened with the case of the unrecognised village of Al Aqaba, near Tubas. With the Israeli legal system heavily stacked against Palestinians, many feel that in order to pursue a legal battle, the owners should take their case to the International Court of Justice – a court in which they are much more likely to receive a fair hearing.

In the meantime, the villagers will not sit by and idly wait for bulldozers to enter their village yet again. They have vowed to fight against this system of apartheid that keeps them from their neighbours in the Palestinian village of Taybeh, annexed by the wall; that shoots rubber-coated steel bullets at children; that threatens to demolish their homes.