Indymedia UK: Carmel Agrexco’s depot shut down in commemoration of the Nakba

In the early hours of Saturday morning, activists occupied and shut-down the HQ and only UK freight warehouse of Carmel Agrexco – Israel’s largest agricultural exporter from the Occupied Palestinian Territories. The occupation held for over 6 hours until they were forcibly removed at 12 noon. 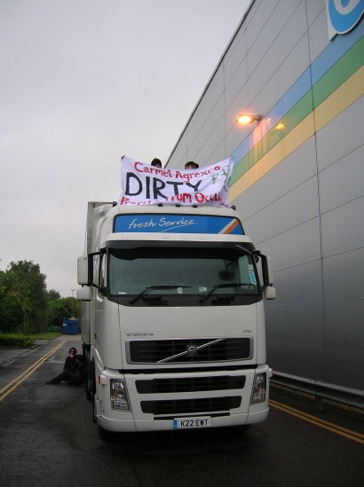 During the occupation over 10 loading trucks intended for the warehouse were sent away. British supermarkets – accounting for 60% of Carmel-Agrexco’s total exports – had some of their orders affected. The Israeli government has a 50% stake in the company. Exports include flowers, avocados and herbs grown in illegal Israeli settlements on occupied Palestinian land.

Early in the morning activists occupied and shut down operations at the Carmel Agrexco warehouse near Heathrow Airport by D-locking themselves to gates and to a lorry within the compound. Two activsts locked to a vehicle barrier, one to a truck and one to a main gate. Others climbed on top of the truck to further immobilise any loading or unloading work, and suspended banners. The Israeli flag that usually flies over the Carmel compound was removed and replaced with a black flag in mourning for the people of Gaza. 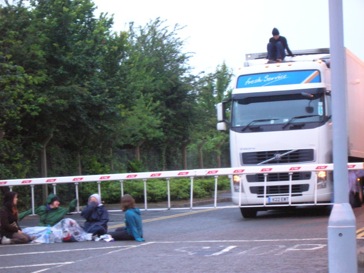 Israeli security guards threatened and physically attacked activists repeatedly throughout the occupation. Collusion between the police and the company was apparent througout the day. While ignoring the security guard assaults the police chose instead to drag the protestors supporters away from the scene.

Yet again, the police made no arrests after the action. When asked why the sergeant said that the order came from ‘higher up.’ We can only assume that the company does not want an embarassing court case in which they would have to disclose information on their illegal business.

Agrexco’s harvesting and sale of goods from illegal settlements built in Occupied Territories has been enabled by eviction, murder and theft of resources – considered “war crimes” under the International Criminal Courts Act 2001. As such, Agrexco’s business of importing fresh produce is “unlawful business”.

Tom Hayes said ‘Agrexco is responsible for human rights crimes against the Palestinian people. The British supermarkets which buy produce from Agrexco are also complicit. Handling stolen goods is an offence whether the offender is a supermarket or an agribusiness. Agrexco must be held liable for its “unlawful business”.’

The action was timed to commemorate 60 years since the Palestinian ‘Nakba’ (Catastrophe) – the theft of Palestinian land, massacres, expulsions and creation of over 700,000 refugees with the founding of the state of Israel in 1948.

Many of the activists participating have spent time living in the Occupied Palestinian Territories and witnessed first hand extra judicial killings, collective punishment and wilful damage of land, property and infrastructure.