On 5th June, at 11am, approximately 50 demonstrators attempted to march to Beit Eba checkpoint to commemorate the 41st anniversary of the occupation of the West Bank, East Jerusalem and Gaza and as part of the 3-day, Palestine-wide, launch of the ‘Summer Against Apartheid’ campaign. 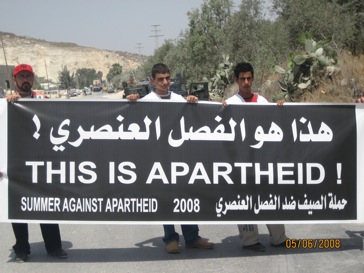 Organised by the Nablus Committee Against the Siege; the Women’s Union; the Committee of Political Parties; and the Workers’ Unions, in conjunction with villages around Nablus, the demonstration commemorated the 41st anniversary of when Israel first began their occupation of Gaza, East Jerusalem and the West Bank, which has since continued unabated. 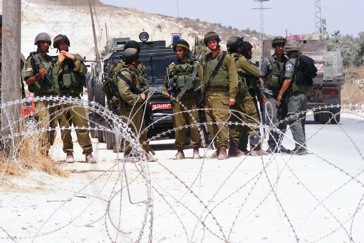 The demonstration was part of a series of actions throughout Palestine to launch the ‘Summer Against Apartheid’ campaign of 2008, with further actions planned across the West Bank throughout the summer. Similar actions are taking place on Thursday in the village of Qaffin, where residents have erected an activist camp against the Apartheid wall there; as well as on Friday in Bil’in, Ni’lin, Al Masara’a and Al Khader 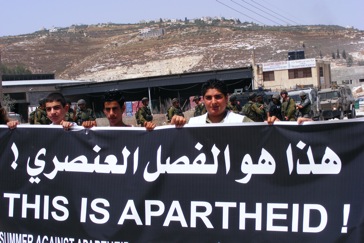 The non-violent demonstrators in Nablus were prevented from reaching Beit Eba checkpoint by an intense Israeli army presence, who were positioned approximately 100m inside the checkpoint, with razor wire and guns pointed threateningly. Organisers had hoped to open the checkpoint, which is a major part of the systematic seven-year siege on the city of Nablus, preventing freedom of movement in and out of the city. 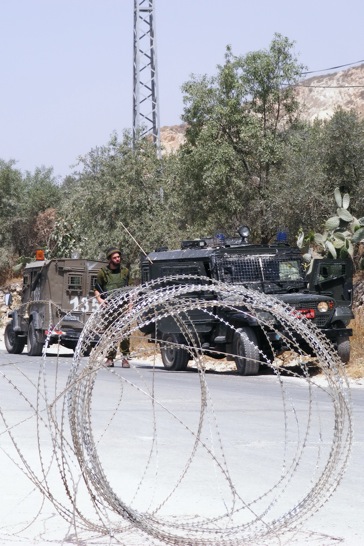 Residents vow to continue to demonstrate against the checkpoints which form the backbone of the system of apartheid that exists throughout the West Bank.