On Monday 31st March, residents of the Tulkarm district continued their Land Day demonstrations with a protest against the separation wall in the village of Nazlat ‘Isa. 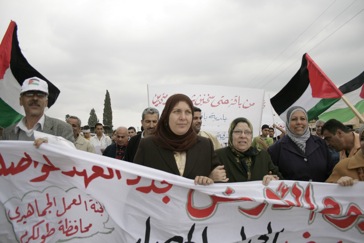 Approximately 100 protesters confronted Israeli soldiers as they attempted to march to the separation wall that denies freedom of movement to Palestinians – preventing farmers from reaching their lands, and families from visiting each other. Waving flags and holding banners, demonstrators demanded to be allowed to approach the wall, standing defiantly as soldiers tried to push them back. 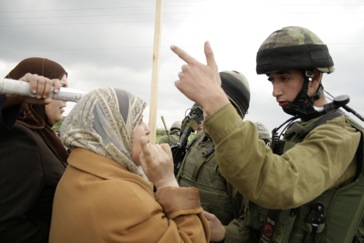 “Go home!” Cried women from the local Women’s Committee. “Leave us alone! This is our land!”

The demonstration, organised by the Tulkarm Women’s Union; municipalities of Nazlat ‘Isa and Tulkarm; numerous political parties; and social organisations, intended to march down the main street of Nazlat ‘Isa, which was once a thriving hub of commerce, but now surrounded by empty fields where over 180 shops were bulldozed by the Israeli army in 2003 to prepare for the construction of the wall. The march was then planned to continue on along the route of the wall until it reached the house that in 2004 was built into the wall itself. Here demonstrators were to protest against the fact that seven houses of the village were separated from the rest of the village by the building of the wall, preventing family members from ever visiting them. 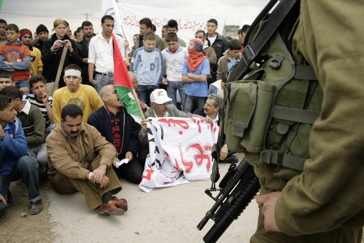 Israeli soldiers insisted that protesters could take another route to their destination, but that at no point would they be allowed to march near the wall. Demonstrators refused this “offer”, and insisted on protesting as close to the wall as possible. 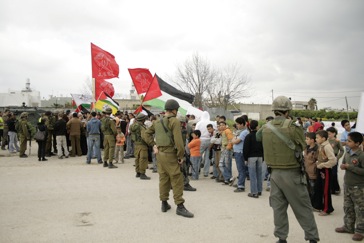 For over an hour the stand-off between demonstrators and Israeli soldiers continued, with Palestinians remaining non-violent despite the march through their own lands being curtailed by the presence of the occupying army.