New
Home / In the Media / Many injured in weekly demonstrations

Many injured in weekly demonstrations

Palestinian sources reported on Friday that several residents were injured after the army fired at residents, Israeli and international peace activists who carried a nonviolent protest against the continued closure of a main road since late 2000.

Dozens of vehicles drove from the center of the village towards the road while dozens of protesters carried Palestinian flags and chanted slogans against the Israeli occupation.

Soldiers, intensively deployed in the area, placed barbed-wires in front of the protesters and fired rubber-coated metal bullets and gas bombs at them. Dozens received first aid after inhaling gas fired by the army.

The road, known as Latron Road or Road Number 443 in Israeli military terminology, was closed since the beginning of the Al Aqsa Intifada late September 2000, and the army placed concrete blocks and gates on the road to shut it down.

Nearly 35000 residents of villages near Ramallah are negatively affected by the ongoing closure of the road.

On Friday at midday the villagers of Bil’in, a village located near Ramallah in the centre of the West Bank along with their international and Israeli supporters conducted their weekly protest against the Israeli Annexation Wall on the village land. 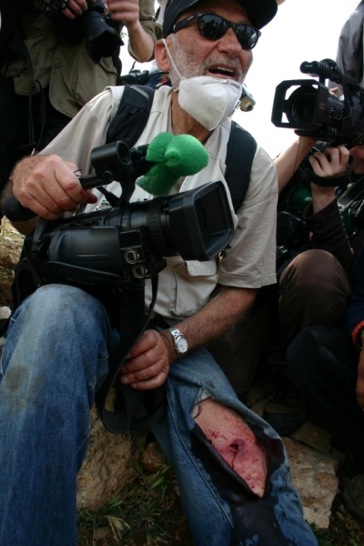 After Friday prayers, the protesters marched from the village towards the gate of the wall, which separates the villagers from their land.

As soon as the protest arrived at the gate, Israeli troops stationed there showered them with sound bombs, tear gas and rubber coated steel bullets.

A number of civilians were injured, including an Israeli journalist identified as Israel. The man sustained wounds to his leg after being directly hit by a rubber coated steel bullet.