At 3pm on Wednesday, 16th April, the mutilated body of 15 year old Hammad Nidar Khadatbh was found in lands of the illegal Israeli settlement of Al-Hamra by his father, who was out searching for his missing son. 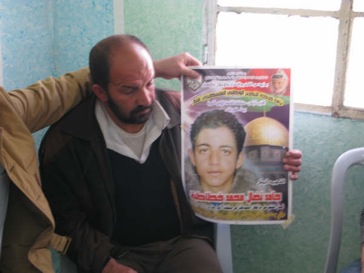 Hammad had left the house at 9am on Tuesday, 15th April to work on the family’s land, located near the stolen agricultural lands of the settlement. As the second eldest son, he was picking cucumbers for the family rather than going to school, to help with the income of his struggling family. At evening he failed to return home, and so his father and other family members immediately went searching for him. They found nothing. They set out again the next day, Wednesday, and found his body in a place they had searched the day before – clearly dumped overnight.

Hammad’s body was naked, bloated, and tortured. His neck was broken, and his face had been smashed in with rocks. One finger had been cut off and there were multiple holes in his torso, seemingly made by a sharp, round implement – something like a pen, his family explained. An Israeli police officer who arrived on the scene to investigate the incident confirmed that Hammad had been murdered, but made no comment as to by whom. Hammad’s body was immediately taken to the coroner in Jerusalem, but the report on the exact cause of his death will not be available for another week.

After speaking to many people in the area, it was established that Hammad had tried to return home via the Al-Hamra (Arabic for “red area”) checkpoint, but was refused passage through as being only 15 years old, he had no identification (IDs are only issued to Palestinians aged 16 years and over). It appears that Hammad was then forced to walk around the long way home, and was taken at this point on Tuesday night.

Given the location of the body – on settlement lands and near an Israeli-only apartheid road – the family are convinced that Hammad was killed by settlers from the Al-Hamra settlement. His father explained that his son was only a young boy, and had no enemies. Also, he explained, there are no Palestinians in that area, only settlers from the agricultural settlement.

The 11500 residents of the village of Beit Furiq, located near the northern West Bank city of Nablus, have regular problems with the illegal settlements near their village. Approximately three years ago a 78 year old man, Mohammad Abu Oday, was killed when settlers from Itamar settlement destroyed his head with large rocks. Another young man was also shot dead by settlers, and five others have been injured whilst attempting to pick their olives. Residents advise that these attacks happen when Palestinians go to lands that are anywhere near to settlements, occurring every couple of years.

Interestingly, these attacks elicit no repercussions on the settlers by the Israeli military such as are inflicted upon Palestinian villages in similar, or even lesser situations. The village of Beita, for example, was shut down for four days last week, with massive roadblocks installed on every road to the village, and residents arrested for attempting to leave after a shooting occurred near an Israeli-only road in which no one was injured.

Hammad was buried at 3pm on Thursday 17th April, and is survived by his parents and seven siblings.