At approximately 8:30am on Sunday morning Israeli army forces again invaded the northern West Bank city of Nablus. Israeli soldiers surrounded an apartment building in Al Ein refugee camp, before occupying an empty apartment on the top floor. Nearby residents advised that the soldiers occupied the apartment for approximately three hours, before withdrawing. Ayam, who lives on the bottom floor, reports that this happens so regularly now that they have become accustomed to it. It is common, she informs, for soldiers enter the building without harrassing the residents, but recounts an invasion four months ago where Israeli soldiers forced twenty of the occupants into one apartment and kept them imprisoned there for three days.

This is the third time in the past three weeks that the refugee camp has been subject to a large-scale invasion; the last invasion occurring just five days ago. Home invasions and occupations have become a regular feature of the invasions, with one family reporting soldiers occupied the lower floor of their home for four days.

Many families have reported experiences of having sound bombs and tear gas thrown into their homes, as well as extensive damage being inflicted on the homes. Many homes, for example, bear scars of soldiers breaking through floors and walls, whilst others show evidence of random and spiteful wreckage, such as in the Mabrooka’s family house where soldiers burnt all the furniture. 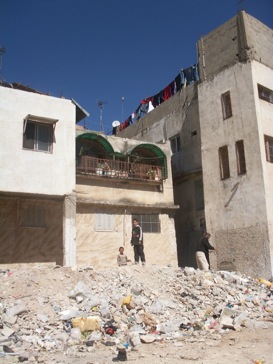 Whilst these incursions and attacks are undertaken under the pretext of “security purposes”, in reality they often appear to be acts of collective punishment inflicted upon families who have a relative wanted by the Israeli army. The experience of Hiyam and her family indicates the existence of such a strategy, whereby the Israeli army Commander, Asaf, whose unit invades her home with alarming regularity, advised her that he will massacre her family in order to create a trap for two of her brothers who are wanted by the Israeli army, but do not live in the home. This is not simply an idle threat, but was shown to be a serious danger when another of her brothers, who was not and never had been wanted by the Israeli army, was shot by an Israeli sniper as the soldiers surrounded their home. Hiyam recounts Commander Asaf telling her that her brother was killed in order to make her family angry, “to burn your blood”, and to break their hearts.

Hiyam’s home is invaded by the Israeli army with such regularity that they cannot keep up with the repairs of the damage inflicted. Recently, she advised, Israeli soldiers invaded her house every night, during which time the family is kept in a single room, prevented from using the bathroom. Three days ago, soldiers shot tear gas into her house and made a fire on the newly re-tiled floor of baby clothes and university study notes they found in the cupboard of an upstairs room. Now her family members have intentionally reversed their sleeping patterns, and sleep in the day, rather than at night, because they know at night the soldiers will come.