On January 1st, Mohammed Khatib and Abdullah Abu Rahme of the Bil’in popular committee were badly beaten by settlers while non-violently attempting to stop the positioning of a settlement outpost on village land. Abdullah was released from Sheik Zaid hospital the same night, Mohammed returned home later the next day. Cameraman Emad Bornat was beaten also but escaped with footage of the attack after settlers destroyed his camera. 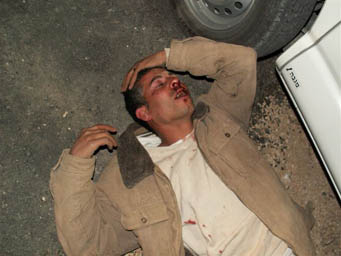 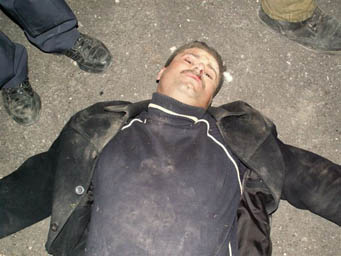 Settlers arrived around 7pm and placed a caravan on the land of Bil’in, creating an outpost to the illegal settlement of Modi’in Illit. The aim of the outpost seems to be to stop the army moving the Annexation Wall further East to give Bil’in some of its land back, as per the Supreme Court decision awarded in September. The settlers are calling the caravan a synagogue in an attempt to make it harder to remove by the Israeli military, a common practice in the West Bank. 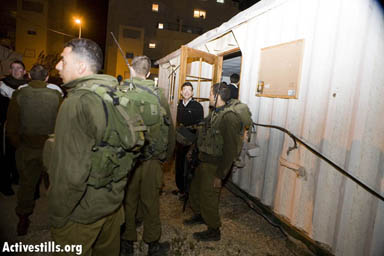 The settlers were attempting to place a second caravan when Mohammed and Abdullah, together with Emad, quickly arrived on the scene and sat down under the caravan, preventing the settlers from securing the structure. Many other Bil’in residents arrived soon afterwards but were prevented from accessing the site by soldiers at the gate through the apartheid wall, which runs directly through Bil’ins land.

Armed settlers approached the group and were overheard saying “lets break his head” in Hebrew by an Israeli talking on the phone to Mohammed before the attack. The settlers then proceeded to attack the group, breaking Emad’s camera, who then left to protect the film inside. Over an hour after they were called, the police arrived and broke up the assault, but did not force the settlers to remove the structures, which were secured down after Mohammed and Abdullah were badly beaten. An Israeli activist arriving on the scene called for an Israeli ambulance, but the ambulance was not allowed to take them to an Israeli hospital, instead they had to wait at the Nahalin checkpoint for a Palestinian ambulance to arrive and finally take them to hospital. 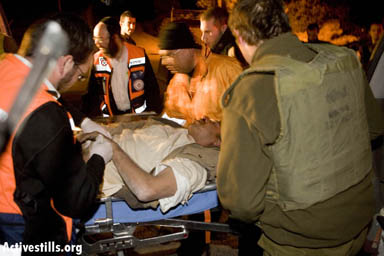 According to official sources, two Palestinians and two settlers were arrested. In fact, no one was arrested, but the police offered to ‘look into doing so’ if the victims wish to press charges. Police also said the structures would be removed in the morning. The caravans were taken down early Thursday morning.

Mohammed Khatib and Abdullah Abu Rahme, members of Bil’in’s Popular Committee Against the Wall and Settlements, are among the leaders of Bil’in’s three year nonviolent struggle to save Bil’in’s land from Israel’s Wall and settlement expansion. Bil’in’s nonviolent struggle has gained support from Israeli and international human rights activists, received significant Israeli, Arab and international media coverage, and has spread to neighboring Palestinian communities.