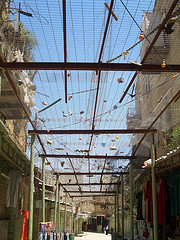 At approximately 10:30 AM, Human Rights Workers (HRWs) received a call that settlers from the Beid Hadassah settlement were throwing objects at Palestinian business and onto the Al Shallalah street.

HRWs arrived on the scene too late to film the settlers in action but followed a shopkeeper around the area as he pointed out the objects thrown onto the street: a brick, a mostly empty can of paint, some white powder, and a full can of what appeared to be varnish or polyurethane.

The dumping of trash and toxic materials into the street by settlers occurred fewer than 10 meters from an Israeli soldier stationed on a shopkeeper’s rooftop. No stores were damaged or vandalized in the process.

This occurrence is not uncommon: shopkeepers have hung up wire mesh nearby in response to previous dumpings, and such wire mesh is hung up in Hebron’s Old City under the Avraham Avinu settlement for the same reason.

HRWs remained at this location, expecting another round, but the dumping did not resume.