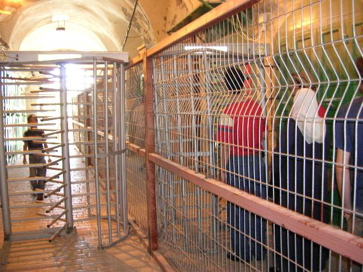 This morning Human Rights Workers (HRWs) visited the Ibrahimi School near the Old City of Hebron to collect testimony regarding a recent invasion by the Israeli military. School officials state that the Israeli military (it was unclear whether this was border police or regular army) invaded the school yesterday morning from about 9:15 until 10AM. The headmaster told HRWs that the two teams of 6 military invaded the school and entered each room as though it were a combat exercise. Faculty reported that the children were very frightened, some to tears, and one had a bathroom accident.

Many of the faculty, staff and students must pass through the checkpoint between the Old City and the Ibrahimi Mosque/Synagogue, a checkpoint notorious for the aggression of its border police presence; HRWs have recently observed border police keeping their guns pointed towards people waiting to pass the checkpoint, and arbitrary detention of young males beyond 90 minutes is common. This morning Israeli police and border police threatened to arrest HRWs and close the checkpoint if HRWs didn’t leave immediately. As this checkpoint has been closed to punish the Palestinians for the presence of HRWs, HRWs on the scene decided to move. HRWs also note that this school is surrounded by 4, sometimes 5, Israeli checkpoints, and everyday access to the school is a hardship for students, faculty and staff.