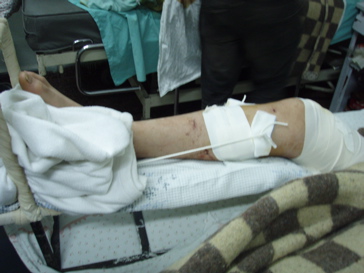 During the recent Israeli army invasion of Azzoun village, two boys were badly injured by live ammunition, which was captured on video.

On Friday, January 4, 2007, around ten Israeli army jeeps and armoured personnel carriers (APCs) entered the village of Azzoun near Qalqilya. The occupying forces remained in the village throughout the day, shooting sound bombs.

The following day at approximately 10:00 am, the Israeli army re-entered the village imposing a curfew and shooting sound bombs, tear gas and live ammunition. Just before noon, Mohamed Faisel Sleem and Othman Mohamed Radwan (two teenaged boys from the village) were shot in the town square by Israeli soldiers in an armoured jeep.

Mohamed Faisel Sleem was first shot in the leg, then, while lying defenseless and unarmed on the ground, was shot again from even closer range in the same leg. Approximately five minutes later, Israeli forces once again fired on the second unarmed boy, Othman Mohamed Radwan, from very close range, shooting him once in each leg. Both boys are currently in Nablus hospital recovering from the gunshot wounds.