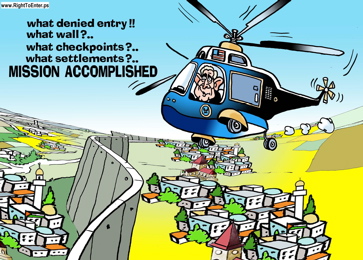 U.S. President George Bush landed in Israel yesterday on his first Presidential trip to the country. He participated in a press conference in Jerusalem with Israeli Prime Minister Ehud Olmert in what both men termed a “historic” and “monumental” occasion. After listening to both so-called leaders make their opening comments and fielding questions from journalists, the only groundbreaking revelation I could register was that the naiveté of President Bush, either real or a charade, only served the agenda of one party in the region – Hamas. The radical Islamists at Hamas could not have recruited a better cheerleader for their movement if they tried.

My opinion may be extreme, but then again, I live in an extremely violent limbo under Israeli military occupation, shaped by a policy both men continuously refuse to call by its true name – state terror.

Again, my opinion is certainly subjective – but then again, I started my day by reading a communique from the real world: a report issued from the United Nations Office for the Coordination of Humanitarian Affairs titled, Gaza Humanitarian Situation Report: Power Shortages In The Gaza Strip (8 January 2008). The report states the background of the issue; on 28 June 2006 the Israeli Air Force bombed the power plant in the Gaza Strip destroying all six transformers and cutting 43% of Gaza’s total power capacity. The report says “households in the Gaza Strip are now experiencing regular power cuts” and goes on to note that “the irregular [electricity] supply causes additional problems. Running water in Gaza is only available in most households for around eight hours per day. If there is no power when water is available, it cannot be pumped above ground level, reducing the availability of running water to between four and six hours per day.” The result of this single punitive measure, as stated in this report, is that if Gaza’s Coastal Municipalities Water Utility “cannot provide its own emergency power supply because of its own fuel shortages, it has to pump raw sewage into the sea which damages the coastline in Gaza, southern Israel and Egypt.”

In another report, released the same day, the World Food Program spokesperson Kirstie Campbell says 70 percent of the population of Gaza has to choose between putting food on the table or a roof over their heads.

For President Bush and Prime Minister Olmert, the fallout expected from the information in these disturbing reports, released one day before President Bush arrived in Israel, was not even worthy of worry. As a matter of fact, the reality that Israel has successfully placed 1.5 million Palestinians in the Gaza Strip, over 50% of them children, in the dark and under the most draconian siege in recent history did not even make it to the footnotes of either leader’s comments.

Instead, much more important issues were on Bush’s agenda. The need to realize and work on a “vision” for the future was in the forefront of President Bush’s mind. According to President Bush, “the parties” should now sit down and “negotiate a vision” – the parties being Israel, the 4th strongest military might in the world and a 40+ year occupier, and the Palestinians, the yet-to-be state of an occupied and displaced people who have been dispossessed by the State of Israel for 60 years and while on the receiving end of a brutal Israeli military occupation for over four decades.

Both Bush and Olmert did send one united message to the world. The two-state solution was still the aim of the negotiations. Reading between the lines, we can infer that the specter of a single state, from the Mediterranean to the Jordan River, is the most frightening vision of all. The terrifying notion of Palestinians (Muslims and Christians) and Israelis (Jews, Muslims, and Christians) living side by side with equal national and civil rights, has never been so apparent since the struggle in South Africa to end racist white supremacy under Apartheid. To ensure that a one-state solution does not materialize in historic Palestine, the U.S. and Israel talk about a two-state solution, but meantime, the U.S. bankrolls Israel as it continues to create facts on the ground that make any viable Palestinian state impossible.

Prime Minister Olmert was clear beyond a doubt: President Bush has been very, very good for Israel. Olmert was nearly jumping for joy as he praised President Bush for increasing the comprehensive U.S. aid package to Israel to a whopping $30 billion.

The issue of Israeli settlement-building in the occupied territory, including East Jerusalem, was raised repeatedly by journalists asking questions. Again, Israel’s Olmert made no excuses; Jerusalem is different, he said, and no one should expect settlements to stop there. As for the other settlements, he said it was complicated and began elucidating the lexicon of “outposts,” “population centers,” etc. If only this entire settlement enterprise were not threatening Israel’s very own citizens and future, Olmert’s blather would have made excellent comedy material – not to mention President Bush’s weird facial expressions as he sought to evade the barrage of questions asking if the U.S. was ready to apply pressure on Israel to make good on its talk of freezing settlements. The best President Bush was able to come up with impromptu was to remind us all that Israel has been promising for over four years to stop settlements but has yet to do so. Even that came with a chuckle, as if the human tragedy these settlements are causing was a side show. Rarely has Mr. Bush given so persuasive an impression of being detached not just from the facts but from any sort of empathy for the victims of this appalling situation.

All in all, it looks like President Bush came to Israel to speak about Iran. Not only did Mr. Bush seem much more enthused about threatening Iran from Israel; his glaring inability to articulate a basic understanding of the Palestinian-Israeli issue left seasoned Israeli journalists chuckling in disbelief at the President’s replies. The local press corps noted every opportunity seized by Olmert to hitch a ride on each one of President Bush’s superficial comments, lauding the importance of the Bush visit, the Bush commitment to peace, and the Bush courage in confronting the region’s difficulties.

Well, next President Bush arrives in my Israeli-occupied city of Al-Bireh/Ramallah. He plans to land two blocks away from my home, in a sports field where I happen to be developing as a commercial project for the Friends (Quaker) School. We were notified today that our street will be one of the many that will be under 100% lockdown. We were advised we would be risking our lives if we went to our rooftop to watch the charade unfold. Public notices from the Palestinian police chief warned that absolutely no protests would be tolerated. In short, we were told to stay indoors. Even our local newspaper advised a civil society campaign I work with that an ad we submitted to be published in today’s newspaper, conveying a message to Bush via a cartoon, would require special approval from the newspaper’s management, given the special circumstance that Bush is in town. (As I write, I’m being advised that our ad**, as is, was refused!) So much for running a business, economic development, and freedom of the press. So much for Palestinian democracy too.

As an American and a Palestinian, if I could advise Palestinian President Mahmoud Abbas on how to greet President Bush today, I would ask him to declare the end of the Palestinian Authority, which Israel has consciously and systematically destroyed. I would ask him to announce that the Palestinians will not accept Rambo-style diplomacy and will revert to international law as the only reference point for resolving the conflict. I would ask President Abbas to request America’s support for non-violent resistance against 60 years of dispossession and 40 years of military occupation by calling for a strategy of boycotting, divestment and sanctions*** on Israel until Israel joins the community of law-abiding nations.

But that’s not all. If I were President Abbas I would tell the world that the Palestinian people will remain committed to the two-state solution until the end of 2008, and after that, if the international community fails yet again to end this nightmare of occupation, the Palestinian people will return to their original strategy of calling for one democratic secular state, where Palestinians and Israelis of all religions can live in dignity and mutual respect as equals – one person, one vote, with appropriate arrangements for cultural autonomy for all.

President Abbas could lead now, or we could all sit and wait amid the increasing numbers of funerals, until the climax of the reality forced upon us by Israeli policy engenders a violent path to the same one-state solution that so many fear.

* See www.ochaopt.org
** Newspaper ad refused by Al-Quds Newspaper is the one at top of this article or may be viewed at http://www.epalestine.com/Bush_visiting_Palestine_highres.jpg.
*** See www.bds-palestine.net and www.bigcampaign.org

– Sam Bahour is a business consultant and may be reached at sbahour@palnet.com.