Only a few months from now the entire children’s park on the outskirts of Azzoun will be in ruins, demolished by the Israeli Occupation Force (IOF). The reason given is the lack of building permit from the Israeli authorities, even though the park is located on Palestinian land. 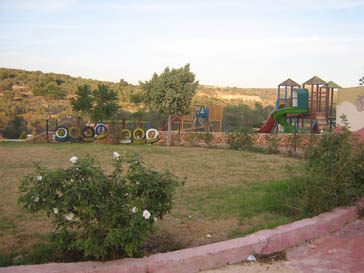 It was in early 2006, when the IOF first razed the children’s park, demolishing it within an hour. The park, just off the road between Azzoun and Jayous, attracted many children both from Azzoun but also from the many surrounding villages, being the only of its kind in the region. The cost of US $200,000 was financed mainly by USAID through the YMCA, with some money coming from the village of Azzoun. The justification given by the IOF for the demolition was that the park lacked a building permit for that specific ground, an area which falls within Area C, thus under Israeli civil and military control. Building permits for Area C are notoriously unattainable, applicants are denied by the Israeli-run Civil Administration, even when building on private land. The IOF had, prior to the demolition, several times given the order to stop the building but despite that, the village decided to continue, strengthened by the knowledge that the building was taking place on Palestinian land.

On the morning of February 22nd, 2006, bulldozers accompanied by Israeli soldiers arrived and demolished half of the park – which consisted of two swimming pools and changing rooms. The park had been near completion, after 18 months of building work.

Almost one year later, that part of the park is still in ruins. The other half of the park, consisting of a large playground and an amphitheater, for the time remains untouched, but looks to meet the same fate soon enough. Approximately one year ago, the Azzoun municipality received a notice informing them that the remaining area of the park was to be demolished. The pretext is the same – without a building permit they are illegal structures. Upon applying for a building permit, the Azzoun municipality was told that they could build on land on the other side of the hill, an expensive and inconvenient proposition. The park area in question is currently in a location accessible to many. 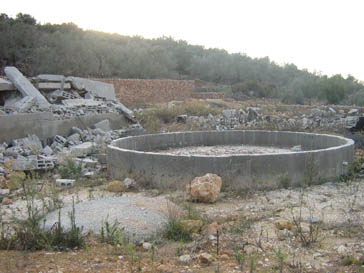 The question now remains whether the planned demolition of the second area of the park can be stopped. An Israeli lawyer is working together with the Azzoun municipality on the case, and has succeeded in getting the demolition postponed until March 15th, 2008. She is now planning to take the case to the Supreme Court, in the hopes of overturning the IOF imposition of an illogical and inaccessible building permit, a barrier which in this case is serving as a barrier to children’s recreation. Particularly in a region suffering from Israeli military invasions, road closures, town curfews, and the losses that come with Israel’s Apartheid Wall, a children’s park was a fragment of hope in very dire circumstances.