The November 7 Israeli Occupation Forces (IOF) invasion of Nablus’ Balata refugee camp left one two-story home destroyed by IOF-detonated explosions and another home damaged by a grenade and random shooting. Local sources further report that several homes in the camp were also invaded and ransacked by Israeli soldiers. Witnesses report up to 40 military vehicles having entered the camp, ending the siege with the detention of 25 Palestinians.

One family in Balata awoke at 2 am to soldiers’ firing from the street at the walls of their 3-story home. As with most of the homes throughout Balata, the family has suffered numerous IOF attacks over the years, evidenced by the grandmother’s testimony as well as the testimony of the walls themselves. The grandmother and one granddaughter pointed out deep pocket marks on the balcony of the living room from the IOF shooting days before. Similar bullet holes, even deeper, punctured the outer cement wall of a bedroom on the same side of the house. Off that wall, the balcony’s wrought iron railing was twisted, deformed from an IOF hand grenade tossed up from the road. The explosion further cut into the concrete side of the balcony. 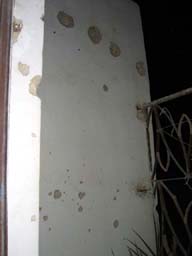 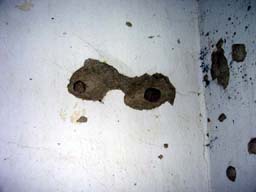 Back inside the living room, a curtain pulled back from a window revealed a bathtub-sized hole in the neighbouring house wall from 2002 IOF attacks. Aged newspaper stuffed into gaping holes in the wall betray further evidence of earlier Israeli attacks.

In addition to the collective punishment of the entire family, three of the grandsons have directly suffered at the hands of the IOF. One seventeen year old grandson was imprisoned for a year and a half in administrative detention. This is a technical term for being kept in limbo, without being charged with anything. It is a form of detention which can last for years, the detained not even granted the basic rights prisoners are supposed to receive. The boy was finally released, still without charges. During his imprisonment, he was moved as he was suspected of being a leader in prison, and consequently kept for months in solitary confinement. When he was eventually brought before an Israeli court to again extend his administrative detention, even the judge saw the absurdity of his detention and thus, finally, ordered his release.

His younger brother walks with a limp, unable to completely bend one of his legs as the knee still suffers from being shot by an Israeli soldier years before, his entire leg bearing the marks of shrapnel wounds and broken bones from IOF shelling. A third grandson is currently imprisoned for an unknown duration, accused of resistance activities, he was arrested when he was 17.

Upstairs, the granddaughter pointed out where ISM activists had lived, where they’d stayed for years, a permanent presence which for one entire year served to prevent imminent demolition from IOF caterpillar bulldozers. One victory. At least 5 other homes that ISM activists were aware of were demolished in Israel’s ongoing policy of collectively punishing families for knowing or being related to Israel’s “wanted men.”

Buckling Walls and Homeless in the Rain

In the early hours of Wednesday morning, after 5 hours of searching and ransacking the house, the IOF exploded the back room of the ground floor, concurrently damaging two neighbouring houses’ walls as well as the upper floor of the bombed house. The targeted home houses 15 family members, who are now homeless as a result of the collective punishment. They were lucky: they were herded out of the home at 12:30 am, at gunpoint, before the 5 am explosion which took out the bedroom and damaged the weight-bearing walls. The neighbours in the home 2 meters behind were still asleep when the bomb shattered their window and damaged their own wall.

The family, now staying in 3 different neighbours’ homes, have put up support poles in efforts to compensate for the weight-bearing walls which are buckling and cracked from the explosion. According to the family, it will cost a minimum of 30,000 JD [~=$42,355] to reconstruct the house. Appraising the 2nd floor rooms, also ransacked and damaged from the invading soldiers and explosion, the father admitted the house would likely have to be demolished and completely reconstructed.

The 30,000 JD to repair the house does not include the loss of furniture, appliances, belongings, all of which were either damaged and broken in the initial IOF ransacking or later demolition. The sons in the family work as laborers, taking what work they can get. Meeting their new financial demands will be a difficult task, one which they stand to bear alone. 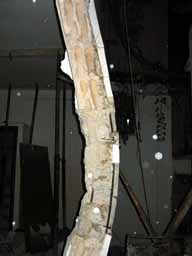 The pretext for this collective punishment was the IOF hunt for one of the sons, 23, a student at university who has been wanted by Israel for the last 2 and a half years for alleged resistance activity with Islamic Jihad.

This is the case with many such destroyed homes and collectively-punished families. The October 16th IOF invasion in a neighbourhood west of Nablus’ Old City, ended with the assassination of three men –one a 70 year old resident at home at the time—and the damage and destruction to homes of numerous residents of the attacked area. Residents further reported their imprisonment in inhumane conditions, where for upwards of 15 hours many were kept together in a small room and were not given water, food, or allowed to use the toilet, while the IOF conducted its “mission,” the search for a “wanted” Palestinian man.

The killing of the elderly resident, Shakher al-Wazir, came around 2 am, upon opening the door to his courtyard after having been ordered to, as well as assured of his safety, by the IOF. An Israeli soldier standing on the stairs opposite the door shot the man with between 3 to 5 bullets from a distance of approximately 3 metres.

A key resistance fighter, Basil Abu Sirriyya (“Gadaffi”), was killed. Another important resistance fighter, (Abed) Muhammad Shinawi, was critically wounded, and two weeks later died from his injuries. The men were hit by an IOF shell shot around 3 am from the neighbourhood under invasion whilst on a rooftop in the Old City.

In the same IOF early morning raid, a woman, Rania Al Shakh-sheer, sitting in her home down the street received a bullet to the back, one of a spray of 20 bullets from IOF soldiers outside the home, according to local witnesses. The bullet lodged near her heart, requiring her immediate transfer to hospital, according to a medic on the scene. She was reported to have undergone at least 5 military operations and was still listed as in critical condition at last reporting.

Two houses in particular were considerably damaged, the bottom floor of one exploded. In the first house, the one in which al-Wazir lived and died, residents reported that Israeli soldiers had entered the home around 2 am shooting live ammunition into bedrooms where family members slept. Approximately 25 residents in the multi-storied building, members of the same family, were eventually made to leave, sent to another location. Thereafter, IOF soldiers searched the house, shooting and destroying its contents as they progressed room to room. Not finding the man they sought, IOF soldiers shot a rocket from a nearby rooftop through the window of the parents’ bedroom, hitting the ceiling and damaging the room with shrapnel. The apparent reason was in hopes of killing the wanted man the IOF sought. He was never in that house. 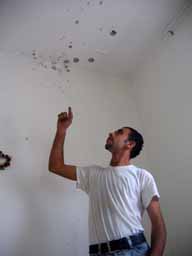 IOF soldiers then moved to the house next door where the same routine was repeated, first emptying the house of its residents, at gunpoint, then searching room to room, destroying household objects as they moved. From after 7 am until the arrest at 6pm of Abdullah Hawwaj, 36, IOF soldiers again ransacked the different floors of the house, searching for Abdullah and his brother, a man recently having undergone surgery and in ill health.

Abdullah, who had served 10 years in Israeli jails from the 1st Intifada, was released in a prisoner exchange deal in 1999. In the early years of the 2nd Intifada, he participated in resistance activities but then quit this resistance to re-gain a normal life. His name was included on a list of 189 recently- pardoned wanted men, a deal made between the PA and Israel. Abdullah warily believed he was safe, as the day before he had gotten reassurance of his safety from an important Nablus PA authority, and was thus in his home when IOF soldiers came in the early hours of October 16th in search of him. 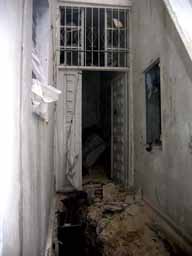 Abdullah’s brother was not involved in any resistance activities; according to his sister, his daily routine was: to the mosque, to work, back home. The two men were eventually found in a hiding place on basement level. In order to avoid having further damage inflicted on their home and family, they came out of hiding, volunteering themselves to soldiers. Shortly afterwards, the basement level was exploded by the IOF, a reminder of the collective punishment which will be inflicted on families of wanted men.

The blast from Abdullah’s basement rooms broke and cracked the 3 inch thick wall he shared with a basement floor neighbour. The neighbour recounted how soldiers told he and his mother to leave their home, he refusing, protesting his mother’s ill health and difficulty walking. Eventually he complied with the soldiers’ order and left, joining others from the floors above on the street. They were given no food or water from their 8:30am evacuation till release after 6pm, and were not permitted to use the toilet for most of the day. While men and women were separated, he reported how when finally allowed to use the toilet they were not permitted to close the door, embarrassing and offensive to women and men. A further insult was the refusal of IOF soldiers to allow the men to wash and pray.

Abdullah’s grandmother, surrounded by broken, shot, and damaged evidence of the IOF’s presence, made clear her feelings for non-Palestinians, non-Muslims: “After all Israel has done to us, we still just want peace.” She followed with a request: “We are not asking for financial support from you, just for justice, for people around the world to know the truth.”

Upon leaving the Balata camp home destroyed just days ago, the owner similarly expressed his wish for the world to know, thanking the visiting HRW repeatedly for showing interest in his family’s loss.