On Sunday, November 3, 2007 , Palestinians delivered a message to Condoleezza Rice on the Israeli-only 443 highway: The segregation that Condoleezza’s parents suffered from and struggled against did not die in Alabama, but lives today in Palestine. The demonstration took place on the side of road 443, above the bridge near Beit Ur that runs above the Palestinian only tunnel that runs underneath the highway.

“We aren’t allowed on the front or the backs of busses, we aren’t even allowed on the roads of our own country.” explained Ahmed of the Popular Mobilization against Apartheid.

Around fifty activists, Palestinian, Israeli, and international supporters, were present, standing up to segregation and discrimination. Villagers wore masks of Condoleezza Rice’s face, and a banner which stated: “Condi: What would Rosa Parks do?” They wore signs which said ‘Apartheid Lives’ in an attempt to show the similarities drawn between the American civil rights movement and South African anti-apartheid movement. 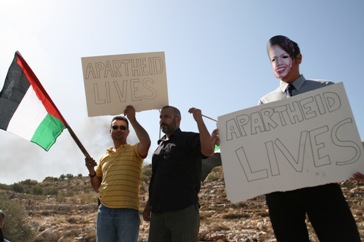 The Israeli army declared the area a closed military zone, blocking attempts by both Palestinian and Israeli activists to join the demonstration.

In the version of the two state solutions being advocated by Dr. Rice in her trips throughout the Middle East, road 443 will remain in Israeli control. Despite the fact that all Israeli settlements are illegal under international law, the Bush administration promised Israel in 2004 that the border of Israel with the future Palestinian state would be adjusted to allow Israel to retain its “already existing major Israeli population centers”. Since this promise in 2004 Israel has increased creation and building of the settlements and settlement infrastructure that make up these major population centers. According to this vision already existing settler roads will run throughout the so called Palestinian state, with bridges for Israelis and tunnels underneath for Palestinians. These segregated roads divide any possible Palestinian state into separate enclaves. 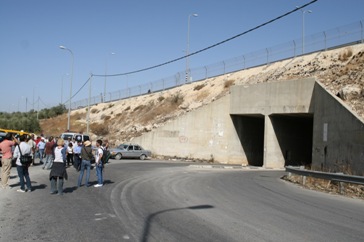 Ahmed, a speaker for the Popular Mobilization against Apartheid said, “the two state solution promoted by Bush and Dr. Rice is not actually two states nor is it a solution. It is Apartheid.”

and visit www.apartheidmasked.org for detailed information, and pictures of the event. 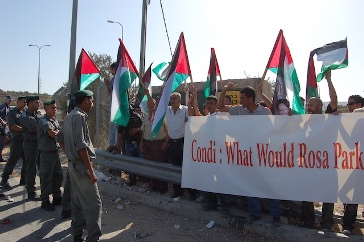