Army oppression continues in Azzun with assault, kidnapping, and shooting

Approximately 10 military vehicles invaded and took over the residential streets of Azzun Tuesday mid-afternoon, abducting two young men, terrorizing the residents, and shooting 3 teenagers with live ammunition. Residents report that over 200 Israeli soldiers, including Special Forces, entered the old city quarter around 2:45 pm from different directions, positioning themselves at various points on the narrow lanes, firing live bullets and throwing sound bombs while closing in on the home of the young man they sought. IOF foot soldiers entered first, followed about 30 minutes later by a series of military trucks and jeeps, as well as two undercover Palestinian minibuses with further special forces inside.

Human Rights Workers (HRWs) at the scene were able to approach the vicinity but were held back at a distance by Israeli soldiers posted at street ends. At about 3:20 pm, one HRW saw approximately 10 Israeli soldiers exiting from a laneway, two young handcuffed and blindfolded Palestinian men being forced along at gunpoint. IOF soldiers prevented the HRW from filming, then again assaulted another HRW further down the lane who had been assaulted by the same soldier the previous day. Soldiers then threw a sound bomb at close range at HRWs moving from the scene.

HRWs saw a convoy of military vehicles leaving the dense area approximately 20 minutes later, after which they were able to speak with the family of the two abducted young men. 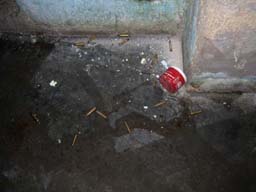 Members of the Mourad and Behah Suhail Rachid Oduan family report that between 25 and 30 Israeli soldiers forcibly entered the home during the incursion, shooting live ammunition sporadically throughout the various rooms of the home, ransacking the house as they moved. The 23 year old sister of Mourad, 24, was asleep alone in one bedroom when soldiers entered firing. Evidence of the shots were visible in the various sizeable pocket-marks in walls and ceiling, shattered window panes, as well as in the holes left in clothing and other items in the room.

The sister and mother report that soldiers hit them and held them at gunpoint while continuing their search for Mourad.

Mourad and his younger brother, Behah, 20, were asleep in two different bedrooms when Israeli soldiers entered firing. While Mourad was the man IOF soldiers sought, they nonetheless, confused about his identity, abducted both he and his brother who resemble one another. Further bullet holes, some as wide as 1.5 inches in circumference, betrayed the soldiers’ random and excessive firing in the different bedrooms. As with the first bedroom, soldiers ransacked the rooms, overturning boudoirs and causing considerable damage to the walls and belongings within. A bedroom door was riddled with bullet holes, at least 7 bullets having penetrated the two inch thick door.

Mourad was hauled from his sleep and kicked and beaten in front of his mother and sister, blindfolded and handcuffed and taken away, along with Behah who received similar abuse.

Approximately 1 hour his abduction, Israeli forces left Behah at the gate to Azzun, having interrogated and beaten him while blindfolded in their custody in the military jeep. Chaffed wrists from the handcuffs and a swollen lip evidence some of the abuse the 20 year old received at the hands of IOF soldiers.

The whereabouts of Mourad remain unknown. The family confirmed that this hour long invasion was the fourth raid on their home in the past two months, the previous three coming in the late hours of the evening, the IOF unsuccessful in their search for Mourad. Previous raids have lasted for up to six hours, soldiers again ransacking and shooting liberally throughout the home.

Azzun residents confirmed that during the same IOF invasion, three teenage boys were shot while in the street: one, 16, was hit in the shoulder chest area and remains in critical condition. A second, 13, was shot in the midriff near his hip, while the third, also 13, was shot both in his arm and his calf. All were taken to hospital for emergency treatment.

Azzun remains a village besieged by senseless IOF violence, daily and nightly invasions, arbitrarily-imposed roadblocks, continual abductions and beatings of young teenage boys, imposed under an unending spate of terror by Israeli soldiers and their unpredictable collective punishment. The people of Azzun are faltering, their economy in shambles, and work and study continually disrupted by the ongoing IOF harassment. 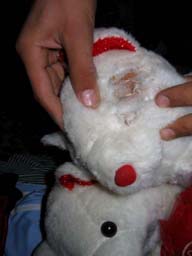