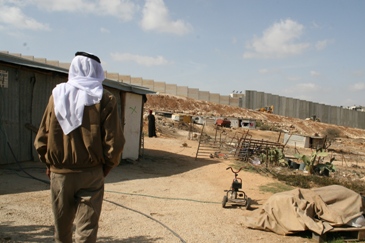 *A villager looks toward the Apartheid Wall that has separated the village members. 18 members of the village are behind the Wall, which now takes 2 hours driving to reach.*

In September this year, a village north of Jerusalem was divided in two when the Israeli government completed another section of the Apartheid Wall. The Israeli government intends to destroy the greater part of the village, which lies to the east of the wall in territory officially recognized by Israel as part of the Jerusalem municipality, to build housing, industry and transport facilities. The Apartheid Wall has separated the village members, leaving 45 people on land claimed by Israel and 18 on the other side in Palestinian territory near the village of Bir Nabala.

The villagers to the east of the Wall no longer have direct access to water and electricity. Their only source of water is a plastic hose that runs under the Wall, and they must call family members on the other side of the wall to turn the water supply on and off. Villagers have also lost access to grazing land for their livestock and pay 300 shekels for transport to retrieve feed from the land they once farmed. The completion of the wall has also prevented villagers from taking livestock to markets in the West Bank and the Ministry of Agriculture consistently denies permits allowing villagers’ access to the West Bank.

The 14 children in the village who used to walk to school must now travel approximately two hours each day to and from school. The children pass through Qalandyia checkpoint to Ramallah and then take another bus to Bir Nabala. This journey is expensive, costing 15 shekels per child, which the villagers struggle to pay. Due to the expense, ten children from east of the wall are living with members of the village on the other side near Bir Nabala.

As the final sections of the wall were being put in place in September, the movement of villagers was restricted by army for ten days. During this period children were unable to attend school and villagers had limited access to food and other necessities. On the 16th of September, members of the village separated by the wall attempted to bring livestock feed to fellow villagers east of the wall via the remaining small gap. The soldiers guarding this opening prevented the animal feed from being brought across and called four army jeeps to the scene to punish villagers.

Twenty soldiers entered the houses of the village members east of the wall, who were to receive the livestock feed, and attacked the villagers. A nineteen year old man and his uncle were taken to hospital once villagers had negotiated for an hour with authorities to allow an ambulance to arrive.

On the 25th of November a lawyer will defend the villagers before a civil court in Jerusalem. Meanwhile, they struggle both to maintain their daily routine as well as to prepare themselves for the legal battle ahead. Members of the village make daily phone calls to NGO’s such as B’Tselem to help them deal with issues such as soldiers at Qalandia checkpoint. They have also made numerous calls to the Palestinian Authority for assistance, but their requests can’t be fulfilled due to the PA’s inability to operate on land claimed by the Israeli authorities.

When asked what the Israeli government intended to do with the villagers after demolition of their homes, the villagers’ spokesman did not have a clear idea. “If we go now, I do not know where we will go,” he told us. “In ’48 we lived in Beir Sheba. As a result of the Nakbah we were forced to move. In 1962 we came to this area and have lived here ever since. I was a 1 year old boy then and have lived on this land ever since. This land belongs to East Jerusalem, we are on Arab land” he added. 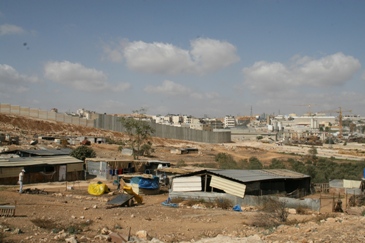