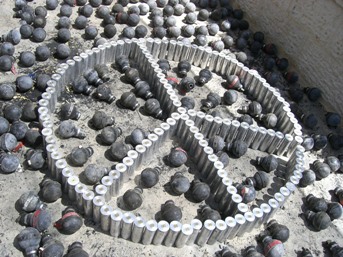 To view the CNN report on the BIl’in victory celebration see: www.americanhummus.com

On Friday, September 7th, the villagers of Bil’in were joined by international and Israeli comrades. Normally they come together every Friday to express their outrage of the unacceptable Apartheid Wall. Normally the day is filled with military violence, tear gas, sound bombs, and billy clubs are common. Once the military begins to fire gas into the crowds, the non-violent protesters tend to back off eventually leaving only the Palestinian children throwing rocks in anger. A mild response in comparison to the rubber coated steel bullets used against them. 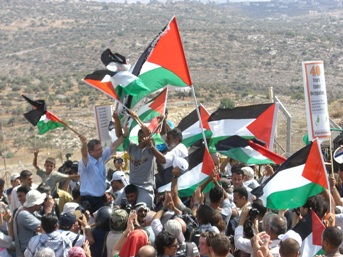 This day was different, one can say it was not a demonstration, but a celebration. There was still a reason to demonstrate, the Israeli Occupation Forces were still standing en masse behind the gate, guns ready and cameras recording. The wall was still there and though due to be moved, it will still be re-located onto Palestinian land, blocking the area to the illegal Matityahu East settlement, also on Palestinian land. There is also the knowledge that though this is a clear victory, it is also a rare victory. Around 120 cases have been brought to court about the Apartheid Wall and the its devastating effects on Palestinian land, water, economy, and culture, but only four have not been rejected.

But this was a victory, and a day to be victorious. Of the now four cases of success in Israeli courts, three of them have been fought with joint non-violent struggle. Activists, demonstrators and participants gathered at the International House in Bilin where baklava, a traditional Palestinian sweet, was served to the guests passing through. At the entrance was an arrangement created out of tear gas canisters collected over the many demonstrations laid out to acknowledge the brutality that has been faced by the village and the demonstrators over the three years it has been going on.

The villagers and their supporters marched towards the wall today, committed to non-violence, stopping people before the gate and telling them not to speak, provoke, or argue with the soldiers. This was not a day to run from tear gas, but to speak, listen, and dance freely. 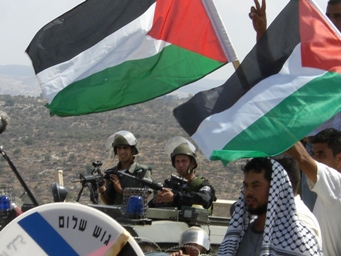 During the celebrations speeches were given, songs sung and music and dancing ensued. In the midst of this, the appointed Palestinian Prime Minister, Salam Fayyad made an appearance, undertaking a speech and further walking up to the gate where Israelis held their position on the other side. 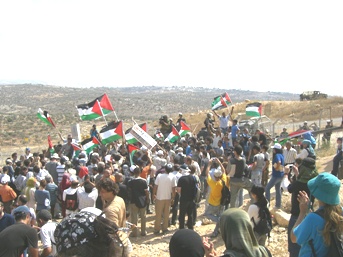 The celebration lasted around two hours, at the end of which a couple of children threw a few stones. The organizers, keen to ensure the demonstration would not escalate into aggression and violence, quickly called off the celebrations and told everyone to return to the village. They stopped the children they could while the army gathered to pass through the gate once more into the village land. Only a few stones were thrown and the villagers put a stop to it as quickly as they could. Celebrations continued back at the village.