Early on the morning of the 9th of August inside Hebron’s old ministry square, Abu Hatim Jaudat Hasula’s hardware store was locked up and welded shut by the Israeli occupation forces. The 64-year-old shopkeeper had dared to defy both the Israeli occupation forces’ illegitimate threats and the appeasing surrender of other local shop-owners that had many other Palestinians shut down business and leave the area. 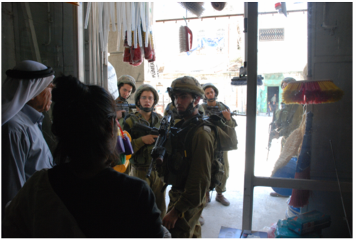 The occupation forces turned up with the proper papers but without any warning. Within 30 minutes, they closed up the shop, still filled with Abu Hatim’s belongings and goods, and then welded the hinges, thus leaving the large metal gates bolted up. Until further orders are produced, the army has declared that the shop will be locked down for two months.

The Israeli occupation forces justified their decision to close down these shops by claiming that they were trying to prevent Palestinians from blowing holes in the backs of their shops and entering a nearby rabbinical school. Neither 64 year old Abu Hatim nor his fellow shopkeepers have ever attempted to do anything even remotely related to this mentioned security threat. 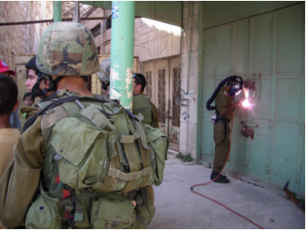 In the past few weeks, many Human Rights Workers (HRWs) have spent the mornings in the old city market to support the local shop-owners in opening for business.

Every single day the occupation forces try to make Abu Hatim close his shop by phoning him and then by showing up at the shop. Yet until this morning the soldiers’ legal papers had been missing. Several shops have already closed including the 4 neighboring shops on Abu Hatim’s side of the market.

HRWs and the Christian Peacemaker Teams had been cooperating in order to support Abu Hatim’s shop and thus a large group of internationals were present soon after the rumors of the military action spread through Hebron. 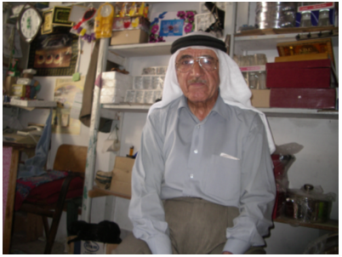 Around 9:30 am, the soldiers began to leave the area, having successfully welded shut all 5 of the old shops on one side of the market, including Abu Hatim’s hardware store.

With the soldiers pulling out one Swedish HRW commented on the morning’s military action: “It’s typical to see the few real attempts to fight the occupation end in paper work and threats. The army knows how this will kill the little business that still is left in the old city and pacify the Palestinians.”

Leaving the market one of the military APCs turned around revealing a newly sprayed political statement on the side of the jeep to the entire market. Rumors have suggested that either HRWs or TIPH are responsible for the ‘Free Palestine’ graffiti on the army vehicle.

Abu Hatim has lost his only source of income, first and foremost directly by having his shop welded shut, but also because he will lose the subsidy the PA gives to business owners in economically unstable areas.

Day by day, business diminishes in the old city, among other places in the old market opposite Shuhada Street. Watching the progress of the Israeli occupation forces, one easily sees a similar future to the old city market as the one Shuhada Street is facing now, completely deserted and almost exclusively open to Israeli settlers.