Atira: Road Closures Restrict Palestinians from leaving their own Village

At 8:00am, Palestinian, Israeli and international activists participated in a demonstration against the closure of the only road leading out of the village of Atira. Approximately 60 people gathered together chanting slogans and waving banners to protest the limited access they have to and from their own village. 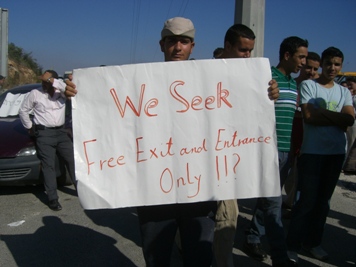 The demonstration itself was totally non-violent as the village wanted to retain their reputation for not causing trouble. There were a number of attempts to walk beyond the barrier however the army declared it a closed military zone. Consequently, the village’s mayor attempted to negotiate with the Israeli soldiers and border police to discuss the issue and seek to redress the travel restrictions placed upon residents. However, Mansoor Khatib, who residents identified as an Israeli border police captain, explained that he had no authority to negotiate or compromise. He did however agree to a meeting the following day at 3pm to find a way of redressing the situation. It was not clear however if he would be personally present or if another member of the Israeli Authorities would be present. Following this, demonstrators slowly dispersed and returned back to the village.

The mayor, Issa Hamed, stated his commitment to addressing the issue without aggression or violence and insisted that he wishes to keep all youths and demonstrators from acting in a violent manner: “If just one person throws a stone, the army will retaliate with live ammunition.” He re-iterated the need to maintain peaceful protests against the closure and would continue to demonstrate until a suitable resolution is found.

Background:
The Village of Atira is located approximately 6 kilometers south of Ramallah, however despite this distance it takes approximately 45 minutes to drive there due to the closure of numerous roads to Palestinians, leaving them to take a long winding route through pot-holed and disintegrating roads. It is surrounded by two large illegal settlements: Beit Horon and Giv’at Ze’ev.

The village itself has only one entrance at which there are a number of road-blocks and a large metal gate. This gate is opened only three times a day to the residents allowing them in and out of the village. The times are as follows:

Outside of these hours the gate is closed and residents are unable to pass. This includes ambulances and other essential vehicles. 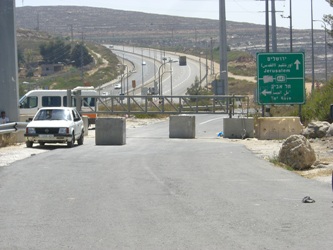 The road was first closed in 2000, however in 2002 the route was re-opened. Since then the military have placed restrictions upon the access of the road arbitrarily, closing it for many months at a time. Approximately 6 months ago the road was opened up completely, allowing free access for the village residents, however three weeks ago they closed the road once more, cutting the village off economically and socially from the rest of the West Bank.

As a direct consequence, five people have been reported to die as a direct result of not being able to access medical treatment in a timely manner as ambulances cannot reach the village. Only a week ago, a local boy endured an acute episode of appendicitis, a potentially life threatening condition if not treated correctly. It took over two hours for him to reach hospital, a period in which he could easily have died.

Of the 3,000 residents of Atira the majority work in Ramallah, as a consequence of the road closures they are unable to work normal hours, commit to a job or become full time workers as required by the roles they undertake. For example, a young barber who wanted to open a shop, could not because in order to work full time, he would have had to be in Ramallah from 11am through to 11pm. This proved to be an impossible task due to the closures. The closures effectively restrict the economic capacity of the population further impoverishing a community that already faces hardships as a consequence of the occupation. A further 20 families that own farm land in the area have had their lands confiscated or their access restricted in turn preventing them from any means of economic survival.

The local school, The Atira- Beit Ur High School is located on the outskirts of the town and is separated from the village by Route 443, now a settler road. Due to restrictions in movement, even for children, kids as young as 6 must cross a rocky valley, climb a steep set of stairs leading to Route 443 and following this, crawl through a tunnel leading under the road, to reach the school on the other side. The mayor petitioned the Israeli authorities to allow locals to construct a path that would enable the children to cross without harm, but the proposal was rejected because the path would lead to the settler road and would therefore pose a security threat.

The restriction of access to land and to travel is another example of collective punishment by the Israeli State against the Palestinians. Collective punishment is a war crime as outlined in Article 33 of the Fourth Geneva Convention, which was ratified by Israel in 1951. The conditions that the village suffers as a consequence of restricted access, demonstrate clearly the strategy of making life for Palestinians so difficult to live in areas close to settlements that they are forced to leave. This creates the perception that Palestinians leave of their own accord, however in reality, this is the consequence of the implementation of restrictions and obstacles constructed by the Israeli state.