After a standoff in ‘Ein Beit Al Ma’ refugee camp, Friday morning, July 20, 2007, in which six international human rights activists forced three jeeps of the Israeli Occupation Force to retreat, denying them further access to the camp, the international activists achieved a second success. At 11:30am several Israeli snipers were forced out of the home they had occupied since 3:00 am that morning. The internationals entered the house after the withdrawal of the snipers and found 35 civilians inside, 20 of which were children.

International activists combed the main thoroughfare of ‘Ein Beit Al Ma’ refugee camp, Friday morning after the standoff, to ensure the army had vacated the area completely. Several Palestinian boys approached the activists to point out Israeli snipers in a building on the hill above the camp. 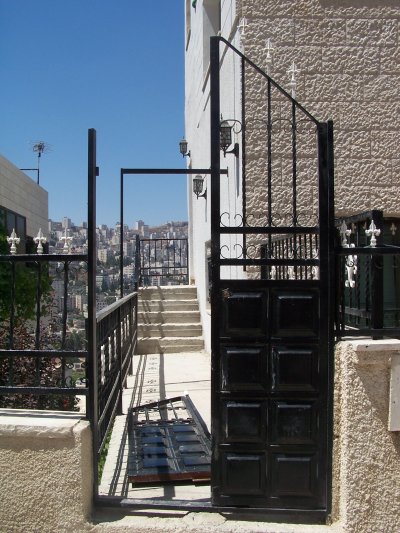 The activists proceeded toward the building where they found the door of the gate kicked in. From the outside of the door they negotiated with the soldiers. “Your position is know you need to leave now,” one international activist shouted at the door. Several other activists echoed his sentiment. A soldier opened the door. “We are here to let you know that its time to leave,” said an activist as the soldier raise his gun to the activists’ chest. “There is absolutely no reason to point that gun at us and you know that.” At this time the activists could see several of the people being held prisoner in their own home. The soldier quickly shut the door when he realized everything was being caught on film.

They shouted from the door to the soldiers that their location was known and that it was pointless to continue occupying the building. They implore the soldiers to leave and think of the families inside who they had endangered.

“Your position depends on the fact that you think it’s a secret that you are in there. You and I both know that that is not the case, so its time to pull out,” said an activist. “This is a war crime. You cannot use civilians as human shields, which is what you are doing. You cannot take up place in an occupied residence and use it as a sniper position. It’s time for you to leave.”

The negotiations continued between the international activists and the occupying soldiers who whispered on the other side of the door.

“I know you have orders that make sense to you right now, but what you need to understand if that you are breaking the law. And you still have a decision to make about what is right. Its time to leave and you know that,” said an activist. “You cannot hold a family prisoner while you use their home as a sniper position. And it doesn’t make sense anyway. Everyone knows you are in here, how do you think we found you—other than the door blown off the gate, its not very subtle. We know you are here. So it is time to leave. Call your boys, get your jeeps, and get out…This is not a strategic forward position for you anymore. It’s time to relocate. Call the jeeps and leave.”

After about 20 minutes, the Israeli snipers did call the jeeps to return for them. Seven Israeli snipers exited the building. When the soldiers and jeeps left, the people trapped inside flooded out onto the street. 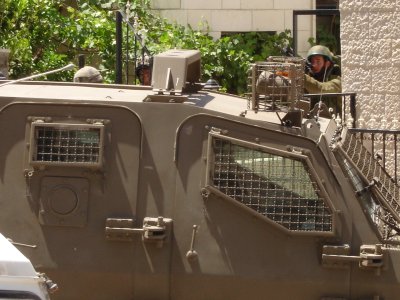 They entered the house at 3:00 am, about 12-15 soldiers, and occupied the top floor, one man who had been held captive in his own home told the international activists. He continued saying that they made all the families stay downstairs. They separated the children from the adults. Two soldiers guarded the door to the building as well as the door to the room where they had forced the families to stay. The rest of the soldiers, he said, stayed upstairs.

“My children were very afraid—they cried,” said one woman who was alone in her flat with her children because her husband, forced by the Israeli occupation and apartheid regime, sought employment abroad.

“The Israeli occupation controls the whole country, what’s another house to them,” said another man about being held prisoner in his own home for 8 and half hours.

One of the families inside the occupied house was visiting from Jordan for a wedding next week; they just arrived the day before. A woman in this family expressed deep sadness and shock over how quickly and drastically life changes in Palestine.

No one was physically hurt during the house occupation nor were any of the families’ personal affects destroyed. One man told the international activists at the scene that he did not hear any gunfire coming from the third floor.