New
Home / In the Media / The world will understand us more

The world will understand us more

from The Guardian Unlimited, 6 June 2007 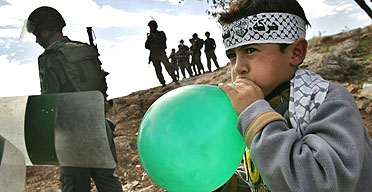 A Palestinian boy blows up a balloon in front of Israeli border police during a non-violent protest against the construction of Israel’s West Bank barrier. Photograph: Oded Balilty/AP

Audio can be found HERE

In the fields around the village of Ma’asara, south of Bethlehem, between the rows of vines, olives and almond trees, a long white scar has been carved across the face of the hillside.

For now it doesn’t look like much, but in a few months – when the bulldozers and workmen have finished – it will form the latest stretch of Israel’s vast concrete and steel West Bank barrier. Here it will push 9km deep inside the occupied West Bank, cutting the people of Ma’asara and the surrounding villages off from land they have farmed for generations. Within the barrier, and so effectively connected to Israel, will be the Jewish settlement of Efrat, part of the larger Gush Etzion settlement bloc.

In Ma’asara it has fallen in part to a school physics teacher named Mahmoud Zawahri to decide what to do about it. For the past six years, since the start of the second intifada – the last major uprising against the occupation – Palestinian opposition to Israeli policies in the occupied territories has been dominated by violence: waves of suicide bombings that claimed hundreds of Israeli lives, rocket attacks, abductions and shootings.

Mr Zawahri, 35, is trying to establish a campaign of non-violent resistance, a weapons-free protest. In making his argument he represents a small but growing number of Palestinians who look back with frustration and disenchantment on past militant violence.

“We need to continue to bring new ideas that reflect the effect of the wall,” said Mr Zawahri. “We believe in non-violence because we want to pass our message to the world through a way which is very white and very black. It’s good or bad, white or black. You have the rights, so there is no need to use violence. You have the right that this wall is illegal and built on your land.”

In 2004, the international court of justice said in an advisory opinion that where the barrier runs inside the West Bank and East Jerusalem it is illegal and should be dismantled. Israel argues that the barrier is a security measure necessary to stop the entry of suicide bombers.

Talk of non-violence is a challenge to the influence of the armed factions that dominate Palestinian society, an argument that says their suicide bombings not just failed to advance the Palestinian cause but set it back so far that now Israel’s military occupation has got tougher, with more checkpoints, frequent incursions and a rapidly growing barrier, and that it brought an economic and political crisis and a violent feud between rival Palestinian factions.

“The second intifada was necessary but the way we behaved? They showed the world that we are terrorists,” said Mr Zawahri. Many Palestinians are quick to compare the failings of the second intifada with what they perceive as the successes of the first, begun in 1987, which was more a popular uprising and far less dominated by the militants. Within a few years, Israel and the Palestinians had signed up to the Oslo accords that brought the creation of a Palestinian Authority and, however briefly, the hope of genuine peace between two states.

Every Friday, the villagers from Ma’asara and the surrounding area gather a few hundred yards from the route of the barrier, among them also activists from Israel and abroad. For now they have obtained a brief court injunction halting the construction so they gather for prayers first, before making speeches on megaphones and then marching back up the road towards their homes. On one Friday march earlier this month, young men from each of the political factions took turns chanting slogans against the occupation as dozens of armed Israeli soldiers walked behind the marchers. Mr Zawahri tried to keep the demonstrators in order, rushing in at one point to drag off a young Palestinian who was on the verge of scuffling with the troops.

Later, he admitted it was often hard to rein in the younger men. In other West Bank towns like Jenin and Nablus the militant groups are powerful forces. In Ma’asara, however, school teachers like Mr Zawahri have more influence. “We can’t control them all but we have to try and push them onto the right path,” he said. “We can guide them in the right direction.” Sometimes, he said, it meant allowing his protesters to throw stones and push the soldiers, but he insisted there should be no weapons at any of the rallies.

Most previous efforts at peaceful protest have faded away, except notably in the village of Bil’in, to the north of Jerusalem, where for the past two years, a regular Friday protest by Palestinians, Israelis and foreigners has been held against the barrier. However, although there are no weapons, there is frequent stone throwing which Israeli troops respond to with tear gas canisters and rubber-coated bullets.

The broader sense of disillusionment with the past decade is striking. Businessmen, particularly in Gaza, say the years since the second intifada have pushed up costs, cut salaries and badly damaged business. “People are getting poorer and poorer and that brings more violence,” said Fadi Liddawi, 31, who runs a business in Gaza City selling imported ceramics wholesale. “Where there is money there is peace. Were there is no money, no peace.”

Others sense the influence of the militant groups is beginning to wane. “Today these groups lack the unanimous respect of the people,” said Imad Ayaseh, who runs the Martyr Abu Jihad technical college in Ramallah that trains former political prisoners. “The people were given promises for the past 15 years but in reality nothing has been achieved. All these leaders in the end fight among themselves for a share of the government while the people are lost in the streets.”

One of the most prominent intellectual supporters of non-violence among the Palestinians is Ahmad Harb, a novelist and dean of the faculty of arts at Birzeit University, just north of Ramallah. At the start of the second intifada he and others like him wrote urgent articles promoting peaceful protest.

“The world understands us more when we use non-violent resistance,” he said. “I believe our strength as such lies in the fact that we are victims, that we are weak. This is the power you see in weakness.”

He argues that the political leadership failed to change their tactics from the days before the groundbreaking 1993 Oslo accords, when the PLO was an armed force living in exile. “I felt that part of the Palestinian leadership had a split personality. On the one hand they signed Oslo, and at the same time they maintained the old, revolutionary discourse of liberating Palestine from the river to the sea,” he said. “That was a deceit on the part of the Palestinian leadership.”

He notes that cultural factors may have inhibited peaceful protest, particularly in a collective psychology of pride and courage that is enhanced by religious exhortations to never give up. Peaceful protest is often regarded as cowardice, he said.

But he also argues that the Israeli response to any form of demonstration has become so tough that protest frequently escalates into violence, as now happens weekly at Bil’in. “The question is how much we as subjects of this occupation can control ourselves and stay peaceful regardless of how the other party responds, regardless of how many people will be killed in the demonstration,” he said. Students at Birzeit tried peaceful marches against the occupation in the past, but after they were met with tear gas and bullets, he said it was harder to make his case. “It begins peacefully and then turns into violence,” he said.