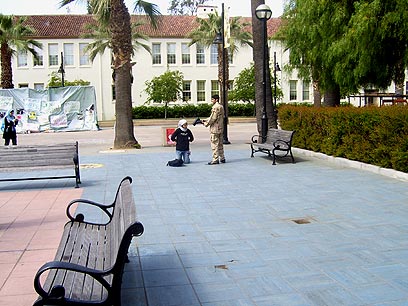 On Israel’s Independence Day this year, Max Grossman, an Art and Design lecturer at the University of San Jose in California, fell upon a giant wall built on campus by a student organization called Students for Change.

The wall was meant to symbolize Israel’s security fence in the West Bank. Students set up a checkpoint near the wall where fifty students posed as either Kaffiyeh-clad Palestinians or armed Israeli soldiers.

“I was in shock when I saw it,” Grossman said. “I am 40, I learnt at Berkley and Colombia, places where numerous public protests took place, but I never saw something like this. They pretended questioning and torturing detainee.” 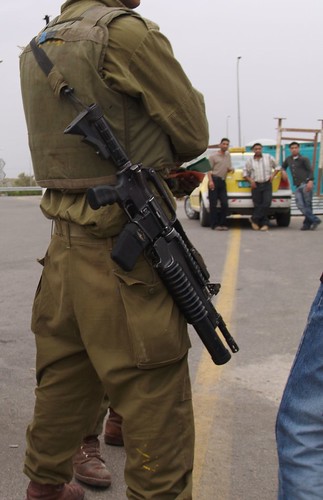 “It was like seeing a play,” said Andrew Schwartz, a student at the university. He said students playing soldiers shouted slogans like “Shut up or I shoot you,” “You won’t see your family today,” and “Don’t speak.”

Schwartz added that some female students disguised as pregnant Palestinian women who were shot by students acting as soldiers for disobeying orders at the improvised checkpoint.

‘Free Palestine’ and ‘End Israel’s apartheid’ were among the slogans that could be read on the wall. Some students called on the US to end its financial support to Israel.

Jewish students staged a counter protest wearing shirts reading: “If I were a suicide bomber, you would be dead.”

Grossman tried to have a conversation with a couple of students disguised a soldiers but to no avail. “They said they did not have to speak to me. They did not want dialogue as they had an agenda,” Grossman said.

After the protest, Jewish students pushed for new campus regulations making it more difficult for students to hold protests.