Roadblock went tumbling down the gorge

The roadblock went tumbling down the gorge
by Kobi Snitz, 3 May 2007 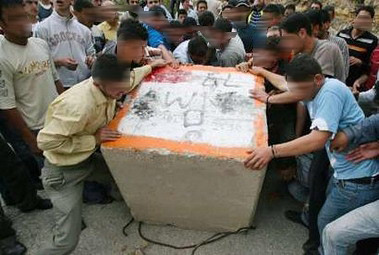 Today, villagers from Ras Karkar, Budrus, Beit Likya, Bilin, Deir Ibzia and other villages marched towards an intersection on the main road to Ramallah which until 7 years ago used to serve about 15 villages in the area. The part of the road which is blocked connects the Palestinian villages of Ras Karkar and Deir Ibzia and does not lead to Israel or to a settlement. Because of the obstacle, the villagers were forced to drive about 45 minutes along an alternate road instead of 15 minutes along the direct route to get to Ramallah. Two weeks ago the alternate road was also closed making the trip take and hour and a quarter and cost about 15 shekels instead of 3 – 5. In response, the villagers decided to open up the main road which has been closed by concrete slabs.

At a demonstration, along with Israelis and Internationals, the Palestinian villagers faced off against a group of soldiers who seemed eager to provoke a violent confrontation. The organizers of the demonstration decided not to grant their wishes and managed to prevent a confrontation. After asserting their right and ability to stay on the road the demonstrators decided to head back. Along the way back, when the concrete slabs blocking the road were reached, they were grabbed by the crowd which tried to push them to the side. The blocks seemed immovable at first but with some ingenuity and shouts of “Allah Huw Akbar!” the blocks were finally rolled away and tumbled down into the gorge.

For the first time in 7 years, car were able to drive up from Ras Karkar directly to Deir Ibzia and were still passing through when the demonstrators left.

Israel is working on the creation of16 tunnels which would create an ‘apartheid’ road network for Palestinians in the West Bank. Many existing main roads are reserved for settlers and Israelis, linking settlements to each other and to Israel. This forces Palestinians into circuitous travelling routes.

For a map of the existing Apartheid road system in the West Bank, click HERE.