The Cleansing of Artas- Continuing to Resist 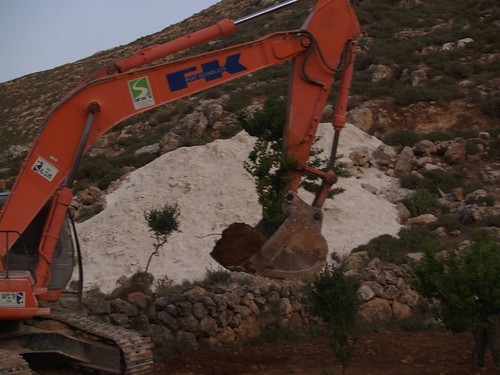 This coming Friday, May 25th the residents of the south of Bethlehem area will hold a large demonstration against the wall which separates them from Bethlehem and steals their lands.

Early Sunday morning the bulldozers destroyed an entire orchard of apricot trees in spite of attempts by villagers and other activists who slept on the land. Occupation soldiers continued their work and ate sandwiches as farmers wept at the site of their ancestral land being ripped apart.

The following day, the villagers responded by holding a demonstration on the land where the trees once stood. Private security guards employed at the site by the Ministry of Defense shot live ammunition at demonstrators and journalists. Israeli soldiers arrested 3 Palestinians including the owner of the land on trumped up charges of assault. As of 3pm today (Wednesday), they are still in Israeli custody. Palestinian Minister of Information Dr. Mustafa Barghouti was also attacked during this demonstration.

The popular committee against the wall and settlements of the south Bethlehem area invites you to join the protest march against the wall of racist separation and land theft. The demonstration will begin at Um Salamuna around noon, with a soccer game on the path of the wall, and will conclude at the village of Artas, where Palestinians from the village will continue to resist the Apartheid Wall and destruction of their land.