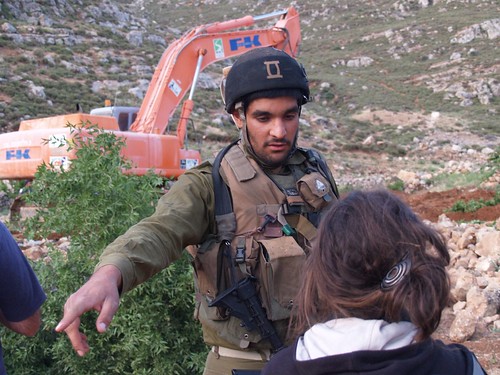 The bulldozing of the land in Artas village near Bethlehem has temporary stopped after an Israeli court ruled a preemptive halt of work in the village on Wednesday and Thursday.

The court ruling was made after the villagers filed a complaint against the Israeli company which is building a sewer in the villagers land for the settlement of Efrat without their permission, Mr. Khaled Al-Azza head of the popular committee against the wall and settlements told IMEMC.

The case was raised as the villagers decided to protest the illegal land confiscation and went to the land to replant trees, uprooted by the bulldozers on Sunday morning.

Samer Jaber, coordinator of the “Stop the Bleeding of Bethlehem” campaign who has been very active in Artas case, said this is an achievement for the nonviolent resistance, although small.

On Sunday Israeli troops assaulted farmers and other Palestinians who came in solidarity with Artas village including Dr. Mustafa Barghouthi, Minister of Information.

The Israeli s security guards who accompany the bulldozers at work opened fire on Monday at a group of villagers who attempted to enter their land. The villagers were accompanied by a number of other Palestinian and International activists.

The guards also opened fire at the journalists who were there to cover the nonviolent protest, however, no injuries were reported.

Troops arrived and arrested three Palestinians from the village and took them to Ofer detention center pending a court hearing on Sunday. The three have been charged with throwing rocks at the security guards.

IMEMC reporter Ghassan Bannoura, who was in Artas covering the incident, confirmed that no stones were thrown at anybody. “The security guards opened unprovoked fire at the villagers and at us, no one threw any stones at them,” Bannoura said.

Israel is planning to run the Settlement sewage system through the lands of the villagers.