New
Home / In the Media / Haaretz: And now, a fetus

Haaretz: And now, a fetus 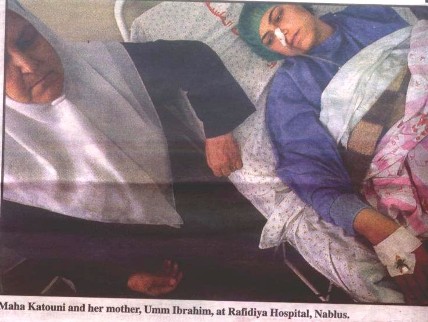 Memorial posters decorate the walls of the Rafidiya government hospital in Nablus, covering earlier posters of countless young people who have been killed. But this poster is like nothing we have seen before: a fetus covered in its own blood, its tiny head blown up by the bullet that struck its mother, and the caption – “Who gave you the right to steal his life?”

The killing of the unborn child, Daoud, by Israel Defense Forces troops raises a series of moral, legal and philosophical questions. Is the killing of a fetus manslaughter? Is it murder? And how old is the victim? But all these questions are dwarfed by the woman lying stunned and injured in the maternity ward of the hospital in Nablus, in agony, with all kinds of tubes attached to her, refusing to answer a single question.

It is obvious that Maha Katouni is still in a state of trauma. Wounded in the abdomen, she lies in bed, her elderly mother by her side. The tube in her nose makes it hard for her to speak. She is 30 years old and was in the seventh month of pregnancy, a mother who got up in the middle of the night to protect her three small children, sleeping in the other room, from the bullets that were whistling by outside. As soon as she got out of bed, the bullet struck her. Bleeding, she fell on the nightstand by her bed. Maha survived, but Daoud – as she and her husband planned to name their son – was removed from her womb with a bullet wound to the head.

“And babies?” a reporter once asked an American soldier who had taken part in the My Lai massacre in the Vietnam War. His succinct answer was just as chilling as the question. “Babies.” And now, a fetus.

The day before, I had been in Soweto, near Johannesburg, South Africa, accompanied by the Palestinian ambassador to the UN, Riyad Mansour, comparing the horrors of apartheid to the Israeli occupation in the territories. The next afternoon I was here, in the Rafidiya maternity ward, standing before the bed of the wounded Maha, who had lost her baby.

The biggest hospital in the territories is practically deserted, barely functioning. It has been this way for two months now. Like the other hospitals in the West Bank, Rafidiya accepts only emergency cases, because of the economic boycott of the Palestinian Authority, which also prevents the workers here from being paid. Only 20 of the hospital’s 168 beds are currently occupied, and only about a third of the hospital’s 380 staff members show up for work. In the emergency room we saw just one patient, who had arrived that morning. The rest of the beds were empty. In the past two and a half months, the workers have received just NIS 1,500 per person, from funds provided by the European Union.

Maha lies in bed, her eyes closed. A green headscarf covers her head. Her skin is ashen. Every once in a while she opens her eyes but then quickly closes them again. Once in a while she also murmurs a few words in a feeble voice and then goes quiet again. How are you? Silence. Maha is a resident of the Ein Beit Ilma refugee camp on the outskirts of Nablus. She is married to Rifat, a 36-year-old school janitor, and the couple have three children: Jihad, 10; Jawad, 7; and Jad, 3. Two uncles and her mother watch over her, not budging from her bedside. For the father of the family, it’s too hard to be here. He’s still in shock.

Last Wednesday was an ordinary day in the Katouni household. The father went to work, the kids went to school, and in the evening everyone went to bed – the parents in their bedroom and the three children in their room in the third-floor apartment. Shortly after two in the morning, Maha was startled awake by the loud sounds of gunfire from the street. She didn’t even manage to turn on the light when she got up to run to the kids’ room next door, to reassure her three little boys and keep them from getting scared. The gunfire was very heavy. The window of her room was open and her bed was close to the window.

Maha got out of bed, took one step, and then the bullet struck her in the lower back. She fell onto the nightstand. Another bullet struck the nightstand. Soldiers from the Nahal patrol battalion were standing on the roofs of the surrounding buildings. “Wherever we are sent – to there we go,” the poet Yaakov Orland once wrote in “The Nahal Anthem,” sung by the Nahal entertainment troupe, which also sang “The Song of Peace.”

Rifat rushed to call an ambulance. The children, who had awakened, were hysterical, especially the youngest, 3-year-old Jad, at the sight of the blood trickling from the front and back of their pregnant mother, who lay wounded on the floor. The bullet had struck her from behind, passed through the fetus’ head and the mother’s intestines and exited through the abdomen.

Family members say that about 45 minutes went by before the ambulance from the Medical Relief organization was permitted to approach. In the meantime, Maha’s mother, Umm Ibrahim, tried to leave her home nearby to come to her daughter’s aid. Umm Ibrahim says that when she tried to leave her house there was gunfire; she hurried back inside. “It’s a miracle that I was saved,” says the woman in the white headscarf. She could not reach her injured daughter and would not see her until two hours later, in the hospital.

The pain is written all over Maha’s face. One of her brothers somehow managed to cross the line of fire and get to her house; he tried to stanch the gaping wound in her stomach with a towel. Her husband, Rifat, was paralyzed with shock. Umm Ibrahim says that her son, who tended to Maha, could see through the hole in her abdomen that the fetus had been wounded in the head and was dead.

The gunfire finally subsided at around three in the morning and they were able to take Maha out to the street, carried by her brother and the paramedic from the ambulance that had parked in the nearby alley. The brother says that on the way to the hospital they were stopped twice by soldiers, who wanted to check the wounded woman’s identity and to make sure there were no wanted men hiding in the ambulance. Maha was barely conscious when she reached the hospital, but her mother says she understood right away that she had lost the baby.

The family says the IDF enters the camp nearly every night and that there is almost always gunfire. Umm Ibrahim managed to get to the hospital at four in the morning, when her daughter was in the operating room and the dead fetus had already been removed.

Dr. Ihab Shareideh was the surgeon who was summoned to the hospital in the middle of the night to operate on Maha. He says that her recovery has been more difficult and slower than usual, not only because of her injuries, but because of her traumatized mental state. Fortunately, not many blood vessels were injured, so the delay in getting her to the hospital did not cause further damage. It is too soon to gauge the extent of the damage to her digestive system, or to say whether she will be able to get pregnant again. The fetus died as a result of the bullet that penetrated its brain on the way to the mother’s intestines.

The anesthesiologist, Dr. Iyad Salim, a resident of nearby Hawara, roams the hospital corridors. On his cell phone camera is a video of the operation and the removal of the fetus. So close to being a fully developed baby, with a bullet wound to the head. The memorial poster shows the etus bleeding from the head. The image is unbearable.

They were going to call him Daoud, after an uncle, and also after a resident of the camp who was killed. At home they had everything ready: new clothes, diapers and a crib passed down from his older brothers. Daoud was buried in the camp cemetery. Only a few close family members attended the funeral of the unborn baby.

At press time, no response had been received from the IDF Spokesperson’s Office.