UPDATE 24 April 2007 Tito has been released from house arrest. He is currently at the Ben Gurion airport awaiting his flight departure. At his court hearing this evening, prosecutors filed a request to prolong his already 96 hour arrest for at least 24 more hours to further the harassment already imposed upon Tito for his direct action in Bil’in. The judge, however, disposed of the request and Tito headed straight to the airport to try and make his flight, which leaves at 23:45.

Update, Mon. April 23 Tito kayak who was arrested at the flag action on Friday in Bil’in is under house arrest now. There is a possibility that he will be deported in the next couple days.

After planting the Palestinian flag upon the Israeli army camera tower which watches over the village of Bil’in, Puerto Rican activist Tito was arrested and taken to jail. The military commander is using his authority to keep Tito in jail for 96 hours, a tactic which is regularly used on Palestinians. After the 96 hours and before seeing a judge, the military commander can extend the jail time for another 96 hours. Tito’s is a very rare case. In situations like this, with Israeli or international activists, arrestees are normally held for 24 hours or less.

Because Tito was scheduled to depart from Palestine on Sunday, it is suspected that Tito may be held in jail until sometime before his flight departs and escorted to the airport. 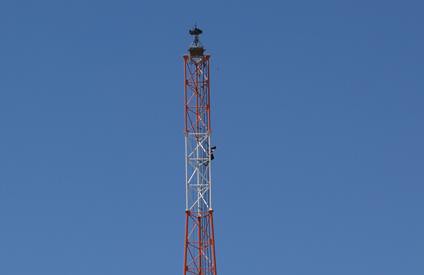 Photo: Tito climbing his way up to the top, ISM Martinez

Alberto De Jesus, a Puerto Rican activist know as Tito Kayak, is under house arrest until 8:30 pm tonight, finishing the 96 hour period that was imposed on him by a military judge in Ofer Military Base, last Sunday night. Tito has been in the home of friends and cannot leave to the police station to get his passport until after the sentence is finished.

Tito was arrested Friday, April 20th, after unfurling a Palestinian flag on top of an Israeli surveillance tower of the Apartheid wall, next to the village of Bil’in , Palestine . His non-violent action took place simultaneously with a press conference at the weekly non-violent demonstration of the Apartheid wall. Bil’in has become the symbol of the non-violent struggle of the people of Palestine and Tito came in solidarity to stand with them in their non-violent resistance as he had done for the people of Vieques, Puerto Rico. The Viequenses struggled non-violently for 60 years to remove the US navy and stop them from using their island as a bombing practice zone. They were successful by May, 2003. Tito expressed that the Palestinians will succeed as well through their non-violent struggle and through more support from the international community.

After he was detained by police, Tito Kayak was held under military code in a prison in Beth El Settlement, near the city of Ramallah until Sunday night. The 96 hours imposed on Tito is what is routinely meted out to Palestinians under this code. His lawyers, Gaby Lasky and Lymor Goldstein are negotiating for his early release so that he can return to the US with his delegation from Puerto Rico on his scheduled flight tonight at midnight. We heard from Mr. Goldstein that Tito sends his greetings to the people of Bil’in and all Palestinians from prison.

Nobel Peace Prize winner, Mairead Corrigan Maguire from Northern Ireland , and Minister of Information for the Palestinian Authority, Mustafa Barghouti were the speakers at the press conference addressing the need for the removal of the wall and other issues caused by the occupation.

Five hundred where joined by two hundred and fifty internationals for the weekly march to wall. The afternoon demonstration was marked by violence initiated by the Israeli soldiers who fired rubber bullets, tear gas and used a water cannon on the crowd of over 500 participants. Mairead Maguire was hit by a rubber bullet in the leg and a Channel 4, British TV camera man was left unconscious until the next day after being hit by a soldier’s batton.

This is the first incident where an international has been held under military code for non-violent civil disobedience. All other internationals who have been arrested have been released after 24 hours.

Tito joined many internationals, including people from South Africa, Sweden , France , Spain , England , Germany , and those notables mentioned above at the invitation of the people of Bil’in to the Second Annual Conference on Popular Resistance. The village is a symbol of the non-violent struggle for the removal of the Apartheid Wall, the reclaiming of Palestinian lands, and the demand for an end to the military occupation of their towns and villages. Bil’in has had 60% of their land taken from them in 2005.
###

JERUSALEM: Israeli police arrested a well-known Puerto Rican activist on Friday after he climbed a tower near Israel’s West Bank separation barrier and planted a Palestinian flag on it, police said.

Photo: Tito and the Palestinian flag atop the tower, ISM Martinez

Alberto de Jesus’ protest took place during the weekly demonstrations by peace activists against the barrier near the town of Bilin in the West Bank.

Israel says the barrier, which dips deep into the West Bank, is necessary to keep Palestinian militants out of Israel. Palestinians say it is an Israeli effort to take land they want for a future state.

During the protest on Friday, he climbed a surveillance tower and hung a Palestinian flag on it, said police spokesman Moshe Fintzy. De Jesus then refused to come down, and only left the tower after lengthy conversations with police and other protesters, Fintzy said.

Mary Ann Grady Flores, a fellow protester from Ithaca, New York, told The Associated Press that de Jesus spent about five hours in the tower, before climbing down and being arrested.

Police said de Jesus damaged a security camera on the tower. He was to be taken to court Saturday night and would likely be deported, Fintzy said.

The Bilin protests routinely turn violent and Noble Peace laureate Mairead Corrigan was injured Friday when a rubber-coated bullet fired by police hit her in the leg, the Ynet news Web site reported.