My Name is Rachel on Al Jazeera Rachel Corrie’s parents and Braden Abraham, the director of My Name is Rachel Corrie, were interviewed last night on Al Jazeera. Several cities, including one of the most recent in Florida, have censored the play.

Director Abraham said that Rachel was not only a humanitarian, but that she was also an artist, two things that make the play a wonderful experience. 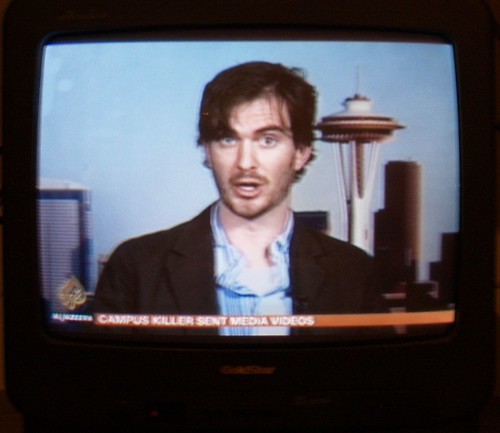 When a man called in to the station during question and answer from Israel, he stated that “Rachel Corrie was a member of the International Solidarity Movement.” The caller claimed that the ISM supports suicide bombers because he said that on the website, the ISM says that Palestinians have the right to use “any means to resist Israel.”

Cindy Corrie answered this. She said she met ISMers all over the world, including the seven that were present when Rachel was murdered. Mrs. Corrie said that none of them condoned violence, let alone suicide bombers. She said that the ISM believes in rights granted by international law and that ISM works with non-violent resistance. Corrie said that she stood side by side with Palestinians, Israelis, and internationals, resisting non-violently in villages such as Bil’in, where 60% of the land is being confiscated by the Apartheid Wall.

“They come together to do non-violent resistance– these are their principles,” said Mrs. Corrie.

Mrs. Corrie mentioned that international law recognizes the right of Palestinians to resists– and that it is not limited to non-violent resistance.