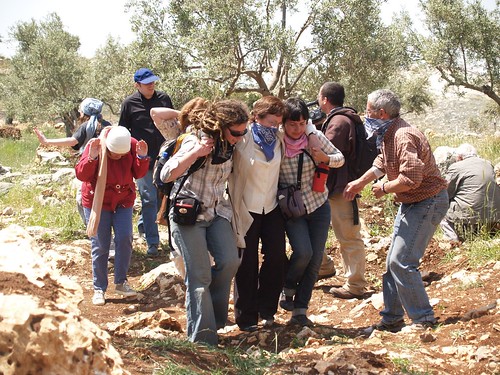 Corrigan, who won the prize in 1976 for her work in encouraging a peaceful solution to the Northern Ireland dispute, was hit in the leg by a rubber bullet and was transferred to a hospital for treatment. She was also said to have inhaled large quantities of teargas.

Policemen and soldiers used teargas grenades and rubber bullets to disperse the routine Friday protest against the security fence near the Palestinian village of Bilin and were confronted by a hail of stones.

The security forces say the area where activists hold their protest is a no-access military zone which they have to evacuate of Palestinian and Israeli protesters every Friday.

Activists say the fence route near Bilin was designed to expropriate Palestinian farm land which will be used to expand a Jewish settlement in the area.

“I salute the residents of Bilin for their peaceful struggle in a region that is so violent and I call on the Israeli public, whom I know

is for justice and peace, to support the residents’ struggle,” Corrigan told Ynet.

Puerto Rican peace activist Tito Kayak climbed a tower on which the army had planted security cameras and hoisted a Palestinian flag.

“All I did was to express my identification with the villagers against the wall which is believed to evil and illegal by the whole world and many leaders like Nelson Mandela, Jimmy Carter and the United Nations,” Kayak said.

Kayak, who was arrested in 2000 for climbing to the top deck of the Statue of Liberty in New York, was apprehended along with six other activists by policemen.

Kayak was a key figure in the 1999 Navy-Vieques protests in Puerto Rico against the US Navy’s use of the Vieques Island for bombing exercises. The protests forced the US to end its activities on the Island.