On April 21st, an Israeli court decision ordering the demolition of all the homes of the approximately 100 inhabitants of the Bedouin hamlet of Al Hadidiya, in the northeast West Bank, came into effect. 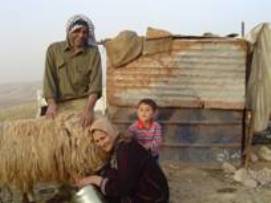 An’am (40) and Omar (50) have seven children, of whom the two youngest, boys ages three years and seven months, are at home with them. The family is refusing to leave and move their tent-home and flock of 140 goats and 100 sheep to where the Israeli Civil Administration has suggested.

Al Hadidiya lies in the Jordan Valley, which comprises almost one third of the West Bank’s territory and provides access to the water reserves of the River Jordan. Israel regards it as strategic and a buffer between it and the Arab states to the east, and wants to keep it for itself.

Of the 2,400 square km. of land in the valley, 455.7 square km. is considered “closed military areas,” and 1655.5 square km. is occupied by 24 illegal Israeli settlements. These “facts on the ground” affect the traditional lifestyle of the Jordan Valley Bedouins and deprive them of their livelihoods. The grazing area for their animals is becoming ever smaller, and consequently the flocks are smaller than they used to be. Also, travel restrictions hinder the shepherds from going to neighboring towns to sell cheese, and reduce the number of merchants coming into Bedouin villages to buy sheep or goats. All of this has affected the earnings of Bedouin families.

An’am and Omar married and settled in Al Hadidiya two decades ago. They have already suffered two home demolitions. This time they are determined to stay in the tent and resist the demolition, even though they face a danger of being arrested. They have invited international solidarity activists to support them and possibly to document the expected brutality of the Israeli occupation, when and if the bulldozers come through. Omar’s words reflect sadness, more than bitterness, when he speaks of the previous demolition some years ago, when several of their sheep were run over by the military vehicles and An’am was assaulted while trying to prevent this. Grazing the herd and producing cheese from the milk is their way of life, and how they provide for their family.

After supper and over a glass of warm, sweet milk, An’am and Omar show family pictures and recount how Arif, their firstborn son, was killed by the Israeli army at the age of 13. He had been throwing stones at soldiers with other boys; the soldiers opened fire on the youngsters and shot Arif in the head. He died six days later, in February 2003. The couple’s four daughters and eldest surviving son attend school in the nearby town of Tammun. An’am and Omar are scared for their two smallest sons, who live with them, and Omar is aware that his resistance to demolition may get him into an Israeli jail, but he repeats they will stay in this house and “will sleep under the stars until they rebuild a new one at the same place.”

As we prepared to leave Al Hadidiya we were given homemade cheese and newly laid eggs. Despite our insistence, An’am and Omar would not take any money; smiling, they kept saying that we were most welcome. The next day, Omar telephoned to ask about our journey home to Haris. They have lost a child to the occupation, the state of Israel has been denying them their basic human rights, such as the right to housing, to earn a livelihood, freedom of movement; bulldozers may come any day to demolish their home; and yet they remain hospitable and think of their guests even after they are gone. We are humbled.