2 soldiers injured by settlers near Homesh
by Efrat Weiss, 24 April 2007 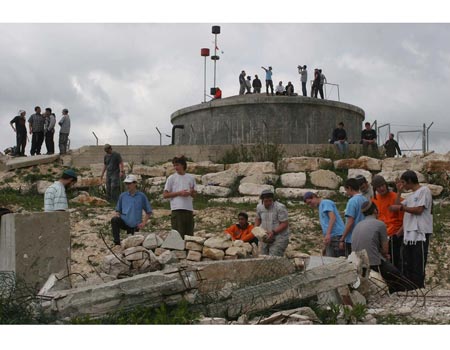 Settlers, right-wing activists march to former settlement in defiance of government decision to bar them

Two soldiers were lightly injured Tuesday afternoon during confrontations with a group of settlers who they tried to prevent from reaching the former settlement of Homesh in the West Bank, the army said.

Hundreds of right-wing activists arrived in Homesh, defying a government decision to bar settlers and their supporters from marching to the evacuated settlement on Independence Day.

The army said a scuffle erupted when the soldiers told the settlers that Homesh was off-limits.

The army set up roadblocks on roads leading to the settlement which was evacuated in 2005 part of the disengagement plan.

Many more settlers are expected to march to Homesh, including Noble Prize for Economics laureate Prof Yisrael Aumann.

The army revoked a decision to allow settlers and activists to enter Homesh on Independence Day over fears that they might refuse to leave the former settlement.