Meretz chairman visits disputed Hebron building, says he intends to submit ‘bill calling for evacuation of all Jews from Hebron’

Meretz-Yahad Chairman MK Yossi Beilin received a not-so-warm welcome by extreme right-wing activist Baruch Marzel upon his arrival at the Jewish area of Hebron on Tuesday. 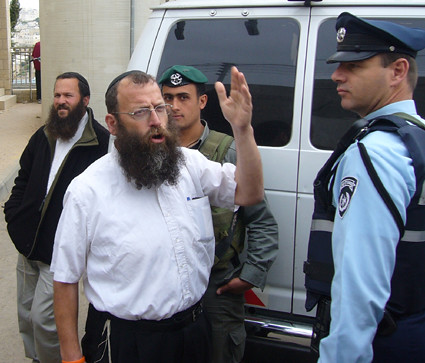 “I intend on submitting a bill calling for the evacuation of all Jews from Hebron after the summer break. This is a new settlement, and I have been working to evacuate this deluded group since the night they invaded. 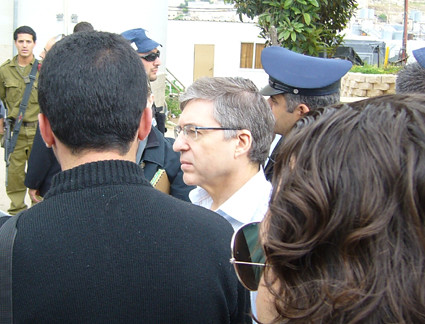 “The only question is whether the Olmert government wants to establish a new settlement in Israel today, in 2007″ despite its promise not to allow new settlements, Beilin asked.

Beilin began his tour under tight security in Tel Rumeida, where he met Hani Abu Aisha, who told him about the ill treatment, as he called it, his family suffered at the hands of the Jewish residents.

Beilin also visited a grocery store nearby the disputed building, where he tried to evaluate the way the new residents behaved towards the locals. The owner of the store told Beilin about the “cruelty and violence” of the Jewish residents of the building.

There was much disorder at the entrance of the building itself, lead by Noam Arnon, spokesperson for the Jewish settlement in Hebron.