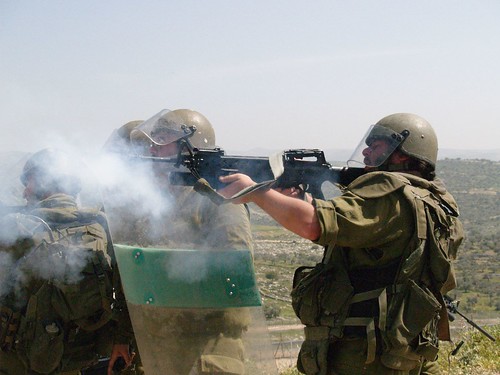 UPDATE: After his court hearing in Jerusalem, Jonathan Pollock was “released on own recognisance” last night. Kobi Snitz said, “This is indeed a complete victory because if Jonathan would have received any restrictions, the army would have been tempted to do this every week. Kobi said that the judge asked, “If the situation was really as dangerous as the police said, why wasn’t anyone else arrested?” According to Kobi, “it was clear that Jonathan was only being arrested because of a previous suspended sentence– which was no cause for arrest at the Friday demo.”

For over two years, Palestinians in the West Bank village of Bil’in have been non-violently resisting Israel’s illegal annexation of their land. Because the Palestinians in Bil’in were honoring the children today, there was a large number of demonstrators, aged 8-12. This did not stop the Israeli army from firing rubber-coated steel bullets and tear gas at the crowd.

After Friday prayers, Palestinians were joined by Israeli and international solidarity activists and began their march to the Apartheid Wall. Today, the Palestinian children began the march, holding banners and singing songs of freedom. When the demonstration reached the gate in the Apartheid Wall, Israeli soldiers were already awaiting their arrival. 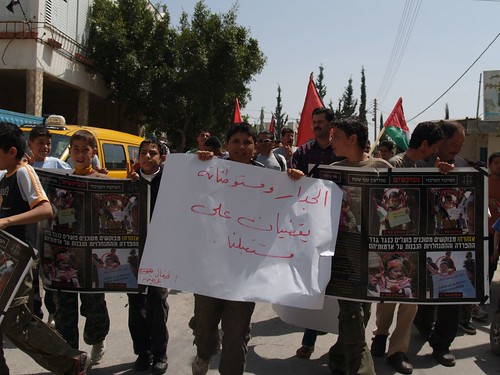 The army had added metal beams of reinforcements to the gate in the Wall. Palestinians began bending the beams and peeling them from the gate. Three soldiers attempted to attack the Palestinians with sticks as this was happening. 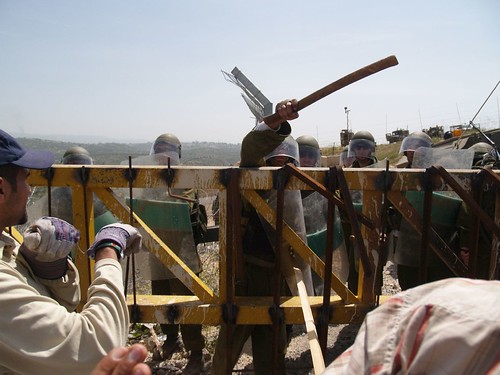 Before any rocks were thrown by Palestinians, and with the children still near the front of the march, soldiers began throwing concussion grenades. The crowd dispersed and some Palestinians at the bottom of the hill started to throw rocks. Soldiers then took aim and began firing rubber-coated steel bullets and tear gas in their direction. A sound bomb exploded next to a 55 year old Palestinian man’s leg, causing his foot to immediately swell up and turn black and blue. Palestinian medical workers tended to the injuries. 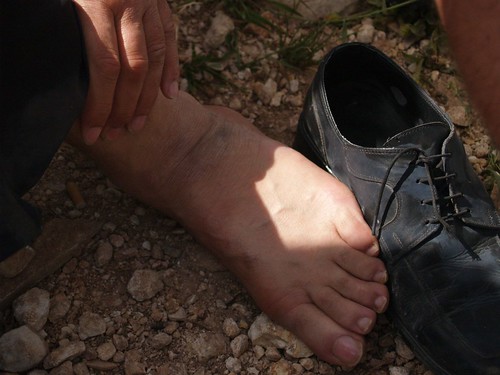 Suddenly, the army arrested Jonathan Pollock, an Israeli activist. Martin, an American human rights worker, said, “I saw the whole thing. Just after the army started firing sound bombs, they grabbed Jonathan, who was just standing to the side of the soldiers. He wasn’t throwing rocks or anything. The soldiers started to take him behind the wall. ‘What did I do? I didn’t do anything,’ Jonathan was saying.” 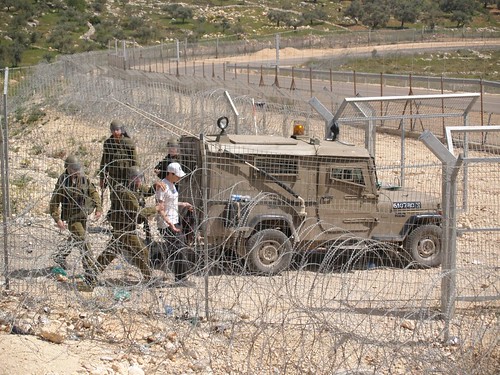 The army continued to fire tear gas and rubber bullets down the hill. Demonstrators who were standing next to the soldiers were chanting, “Shame on you!” and, “They’re just kids!” Ten of these demonstrators, a mix of Palestinian, Israeli, and internationals, then stood in front of the soldiers, preventing them from continuing their shooting. After 5 minutes, the soldiers retreated back towards the Apartheid Wall.

Soldiers near the Wall then started firing sound bombs toward the demonstrators near the Wall. To protect the children, organizers urged the activists to return back to the village. Some stones were thrown by Palestinian youth at the soldiers’ shields and helmets. The army responded by shooting more tear gas and rubber bullets at the retreating demonstrators. The whole march back to the village, the army continued to shoot at the crowd. 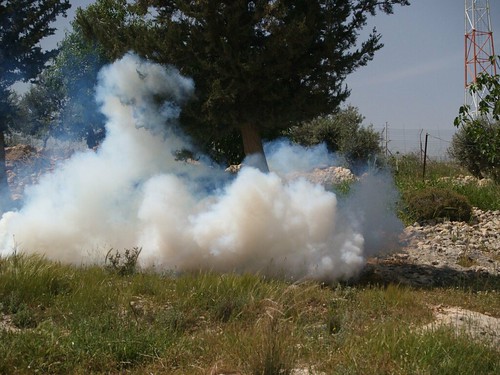 A Palestinian media worker later explained that they counted 14 injuries from rubber bullets and concussion grenades. All of those injured were Palestinian.

Jonathan remains in Israeli police custody at this time (20:30). He is being charged with “illegal assembly” and “entering a closed military zone.” Koby, an Israeli activist, stated that, “the army came to the demonstration looking to charge Jonathan with something. The head of prosecution and the head of interrogation are personally involved with keeping him in jail overnight.”

Bil’in is a Palestinian village that is struggling to exist. Since early 2005, the state of Israel has annexed close to 60% of Bil’in’s land for Israeli settlements and for the construction of Israel’s Apartheid Wall. Palestinians from Bil’in are fighting to safeguard their land, their people, and their liberty. The Israeli army has consistently responded to Bil’in’s non-violent demonstrations with teargas, sound bombs, clubs, rubber-coated steel bullets, and live ammunition.