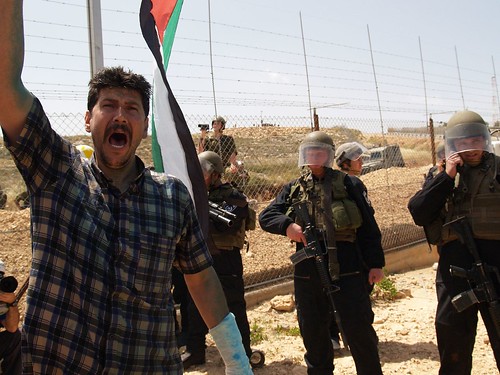 Once a week for 26 months, Palestinians from the village of Bil’in have been non-violently resisting the Israeli Occupation and the Apartheid Wall has ripped through the village. This Friday, Palestinians were joined by international and Israeli solidarity activists. They joined the demonstration outside of the mosque in Bil’in but, instead of taking the normal route to the gate in the Apartheid wall, the demonstrators took a side route. 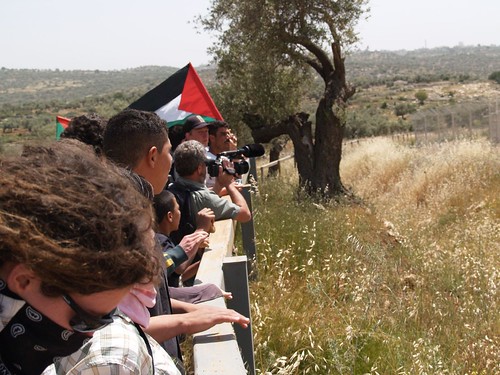 Last week, the Israeli occupation forces shot at least 20 non-violent demonstrators, including Mairead Maguire, the Irish Nobel Peace Prize winner. This week, demonstrators were hoping to catch the army off guard by taking this alternate route.

When the demonstrators reached their destination at the Wall, Israeli soldiers were 200 meters away, awaiting the demonstration to arrival from its normal direction. Even the high-powered water tank was on the inside of the Wall. Little did they know, we were catching them by surprise further down the route of the illegal barrier.

Palestinians were shouting, “No to Occupation, No to the Wall!” Internationals and Israelis joined in, throwing chants in the direction of the few soldiers who made their way to demonstration. The bulk of the soldiers were still up on the hill, too far to shoot rubber-coated steel bullets or sounds bombs.

These few Israeli soldiers who were across the Wall from the demonstration threw a couple tear gas cannisters. The peaceful demonstrators did not budge. 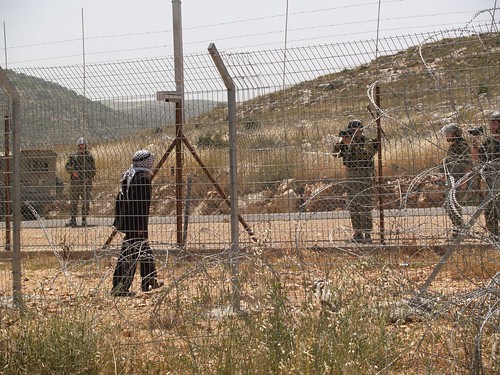 Instead, Abu Sadi, one of the elders of Bil’in, crossed through a torn portion in the fence and walked towards the soldiers on the other side of the Wall. There are actually two walls at this point. The space between, a sort of no-man’s-land, serves as a military access road. And from up the hill, soldiers were entering this access road, speeding towards the demonstrators.

The high-powered water tank arrived on the other side of the Wall as well. A couple other Palestinians followed behind Abu Sadi. The water tank revved up and began blasting the peaceful demonstrators on their faces and backs. Last week, Mohammad Khatib was blasted in the chest and received medical attention for his injuries. He said it “felt like my ribs were broken.” And now, Abu Sadi, probably in his late 60’s, lay on the ground after being smashed by the force of the water. 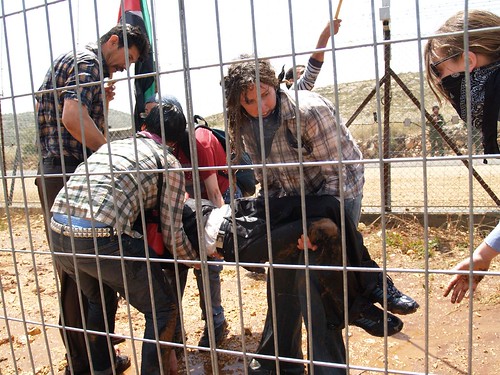 Four street medics rushed over to help Abu Sadi from the ground. The army continued to shoot at Abu Sadi, the medics, and the demonstrators during this process. A handful of other demonstrators then crossed through the opening in the fence.

As more Israeli soldiers arrived, the started to shoot tear gas, rubber-coated steel bullets, and sponge bullets at the demonstrators who had not crawled through the fence. According to a Palestinian who was hit by one before, sponge bullets stick into your skin until you get it medically removed or it just comes out on its own, and they go for $55 a round. 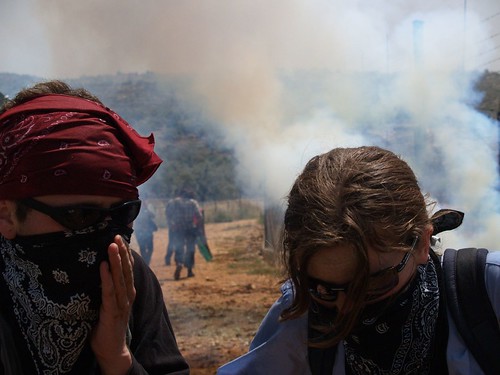 The water tank revved up again but this time started to squirt dark blue water at the demonstrators. Sometimes this water is laced with some sort of chemical which makes your skin feel like it is on fire. Today, it seemed to stain clothes and hands and faces, not to mention staining the earth and trees. It also burned a bit when it entered the eyes. 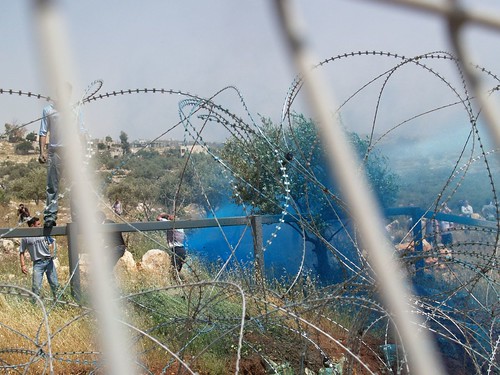 The line of demonstrators in between the two fences marched forwards towards the several more soldiers and jeep who had arrived. The army tried to arrest one of them but demonstrators intervened to de-arrest him.

Abu Sadi crawled atop the hood of the jeep and soldiers continued to fire at the demonstrators still inside of the Wall. 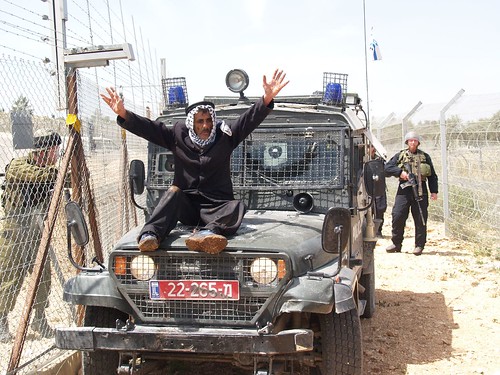 For half an hour, demonstrators sung to the soldiers to “Free Palestine,” to “tear down the wall,” to “end the Occupation,” and asked, “Hey soldiers can you say, how many kids did you shoot today?” The soldiers gave no reply. They just kept on shooting.

At the request of the Palestinians, the internationals and Israelis joined the Palestinians in retreating from the area between the fences and made their way back through the fence, hands in the air, with some attention on the sponge bullet gun aiming in their direction. 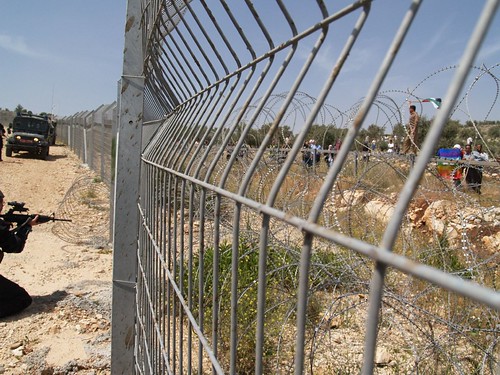 Further towards the gate in the Wall, some of the demonstrators continued to non-violently resist and attempt to reach the other side of the Wall. Abdullah, a Palestinian from Bil’in, was detained by the army but later released.

And soon the demonstrators made their way back to the village, many of them covered from head to toe in a dark blue substance, aimed at quelling their non-violent resistance.

But, like every Friday, Palestinians and their international and Israeli solidarity colleagues will be back, to demand and end to the Occupation, to dismantle the Apartheid Wall which the International Court of Justice has already deemed illegal and calls for it immediate destruction, and to keep up the on-going non-violent struggle towards justice. 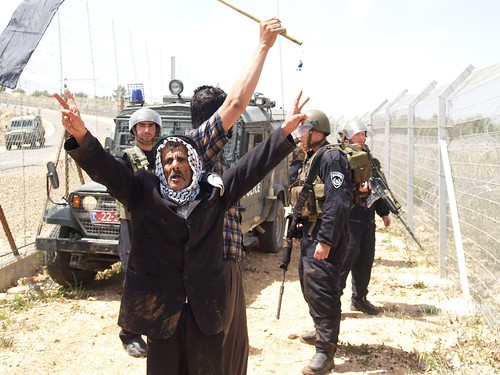