Checkpoint 56, Tel Rumeida: Palestinian school teachers were again delayed for a long time this morning on their way to school. 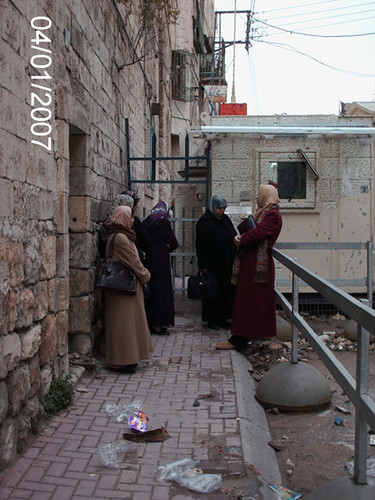 The female teachers refuse to do this because they say passing through the metal detectors so often is harmful to their health, and also because they are teachers, bringing education to Palestinians, and not terrorists.

When challenged by two human rights workers (HRWs) and two members of the Ecumenical Accompagniment Programme for Palestine and Israel (EAPPI) as to why they were not letting the teachers pass through the gate, one soldier first of all claimed that he was not “a doorman for the Arabs”. Later, he claimed that it was too dangerous for him because snipers would shoot him once he left the security of the checkpoint to open the gate. One HRW offered to open the gate herself or to stand in front of the soldier while he opened the gate, but he refused. This same soldier had been seen the previous day standing in the sun, outside the checkpoint, and had not appeared to be worried by snipers then.

Both the HRWs and EAPPI made several calls to the DCO to try to resolve the situation. The response was always that they would “take care of it”. During the final call to the DCO from one of the HRWs the DCO was laughing so hard that he had to pass the phone to a colleague who hung up the phone when the HRW asked for her name.

Finally, after one hour, the gate was opened for the teachers.

After school, the same teachers were again detained for 45 minutes when they tried to return through the checkpoint gate.

Around 17:30, six Israeli settler children surrounded two international human rights workers. The settlers began to physically assault the two women, kicking them and one of their video cameras. One female settler adult was also present, and did nothing to prevent the children from harassing the HRWs.

Four additional HRWs arrived at the scene. The soldiers began told them that the area was a closed military zone and that the HRWs had to leave. The HRWs remained, however, when the army soldiers could not produce the legal documents.

After 20 minutes, the Israeli police from Kiryat Arba showed up. They surveyed the scene but did not go further to search for the settlers who had stolen the camera. The two HRWs who were attacked by the settlers then went to Kiryat Arba police station to file a police report. The officer promised that afterward, with additional police backup, they would seek out the settler thieves.

At approximately 17.15 two HRWs were sat in the olive groves above Qurtuba school when two adult settlers, both with rifles over their shoulders, and a male child settler walked past in the direction of Abraham’s Well. A couple of minutes later three Palestinian children, two girls and a boy, from a Palestinian family in this area walked past on their way home. The two HRWs saw the settlers stop them and turn them back. The HRWs went up to the Palestinian children who said that the settlers had told them they weren’t allowed to go that way to their home. The HRWs then accompagnied the children to their house.

While the HRWs were standing outside the house a group of soliders and four male settler children, aged approximately 10 – 12, came down the olive grove slope towards the HRWs and shouted at one of the HRWs that a soldier had seen him going into a “Jewish house” and that he wasn’t allowed to be there. The house in question in fact belongs to a Palestinian man and is rented at the moment to a local Palestinian. The HRW had earlier walked in front of it, over its porch, and told the soldiers this. One of the soldiers then said that he would check the military cameras in this area and if he saw that the HRW had entered the house, the HRW would be put in jail.