South Bethlehem villagers appeal for solidarity in resistance to Wall

South Bethlehem villagers today gathered on the land of Umm Salamuna to appeal for international solidarity in their struggle against the Apartheid Wall being built across their land. Speeches were given by local representatives and head of the Palestinian National Initiative Mustafa Barghouti. International solidarity activists were urged to join the villagers’ struggle and to tell their home countries about the theft of land in this region. The villages of Wadi Rahhal, Um Salamuna, Al Ma’sara and Wadi Al Niss stand to lose most from the Wall.

After the speeches the around 300 protesters marched to a nearby settler-only road which they blocked. The Israeli army arrived at the scene, and pushed people off the road but no injuries were reported. The demonstration then returned back to the village, where it ended.

Today’s demo comes at a critical time for the South Bethlehem villagers as work on the Wall has just restarted and is continuing every day. Last Tuesday farmers were beaten and arrested for resisting the razing of their land and on Wednesday international and Israeli activists managed to stop the bulldozers for two hours.

Rashid Zaqatka, son of Village Council Head Mahmoud Zaqatka, was released today after three days in captivity on the trumped charge of assaulting a soldier. Rashid was beaten by soldiers for resisting the razing of his family’s land by bulldozers on Tuesday.

This report was updated on Saturday 3rd March. 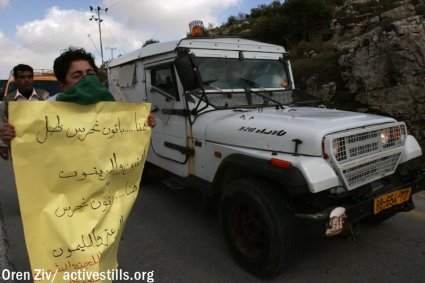