The Palestinian Popular Committee (PPC) for Hebron called a demonstration at 10 am today to protest the continued closure of Shuhada St., the main route through the city centre. About 30 people gathered in their offices and marched with flags and placards through the Bab Azzawiya market area to the Tel Rumeida checkpoint.

They gathered there peacefully and listened to speeches from Azmir al Ajoun, other local representatives and representatives from Christian Peacemaker Teams and the International Solidarity Movement.

Members of TIPH and EAPPI and various Palestinian groups including the Enlist for Peace Organisation were also present. The crowd moved right up to the checkpoint and spoke to the Israeli soldiers there who closed the checkpoint.

Everyone then went back to the PPC offices for tea and a discussion. It was agreed that there is a need for unity between all the various groups resisting the occupation and that the struggle needs to be non-violent.

At 12.55 pm a vehicle from Medecins Sans Frontiers was stopped by soldiers at the checkpoint. They refused to allow them to pass and visit patients in Tel Rumeida. They held them up for an hour and 20 minutes before finally getting the authorization from superior officers to let them pass. MSF say that they have been held up every time they come to Tel Rumeida since this group of soldiers arrived two weeks ago.

Israeli workers were digging all day in front of the Abu Aisha house again. They were drilling into the foundations of the house. 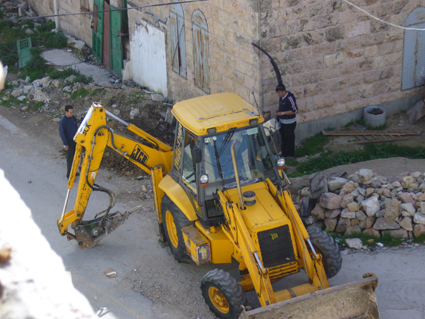 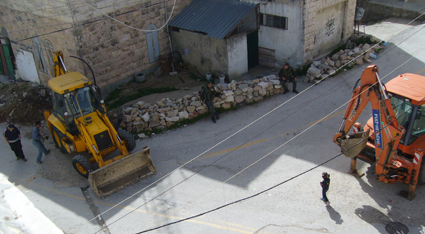 Apparently they want to install yet more CCTV cameras. Afterwards they dumped all the rocks and dirt from the hole on Abu Hamdi’s land. He is very upset about this but does not know what he can do about it. He argued with the JCB driver but got no response.

30 settler boys aged between 8 and 12 yrs attacked the Al Bayed family house on Shuhada St. with stones. They broke the glass on two solar panels. Human rights workers were called. They met 10 of the boys rampaging near the checkpoint and followed them up the hill to Tel Rumeida settlement. Some of them attempted to attack another house on the hill but were prevented by a soldier.