by Anarchists Against the Wall, March 11th 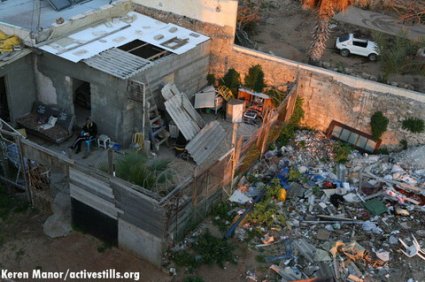 A massive demolition wave was about to begin today with the destruction of a building that is home to a family of five. The family was able to get a judge to issue a 14-day injunction early in the morning, after spending the night barricaded in the house with dozens of activists.

Roughly 300 demolition orders were issued recently against homes of Israeli-Palestinians in Ajami, the largest Palestinian neighborhood of Jaffa. The wave is part of a plan to Judaize and gentrify Ajami of its poor, largely Palestinian community. 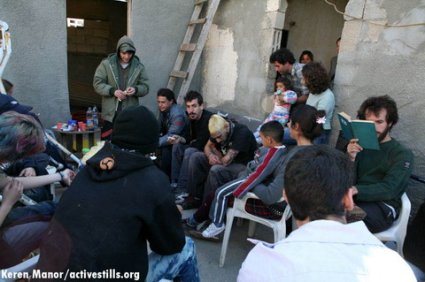 Activists in the yard of the house

From 11pm last night activists started pouring into the Saba family’s home, intending to stop the eviction of the family and the subsequent demolition of the house. Initial legal work was also done, as word of the planned demolition was only heard the day before. At about midnight an injunction request was filed in the Tel Aviv district court. The injunction order issued by the judge was conditional upon payment of a 2,500 NIS bond the following morning.

Only one bureaucratic obstacle remained – the demolition order was supposed to come into force at 8am, but depositing the bond before that time was impossible due to court secretariat operating hours.

Activists barricaded on the roof

Activists continued to arrive throughout the night and the early hours of the morning. When the police arrived they were greeted by dozens of activists, barricaded on the roof, inside the house and in the yard. 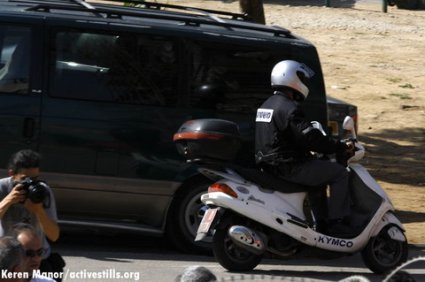 A policeman at the scene

This, and the presence of two Knesset members from the Communist Party, was enough to hold back the cops and contractors for about an hour until the injunction order was ready.

Though the house is off limits for the next 14 days, it is not yet safe. Together with approximately 300 other houses, it is threatened by a plan to Judaize Ajami, and gentrify it of its poor and largely Palestinian community.

This new plan is only part of a long history of colonization and dispossession in Ajami. In 1947 almost 71,00 Palestinians lived in Jaffa. The ’48 War and the brutal occupation of Jaffa by the Zionist Irgun (Etzel) and Hagana turned most into refugees and left only 3,650 Palestinians in the city.

Almost all private property was expropriated and handed to the Guardian of Absentees Property (that’s how Israel chose to refer to the refugees). Later ownership was transferred to the Israeli Administration of Real Estate. Palestinians who remained, many of them from the villages in the area, were boxed off in the Ajami Ghetto, that was surrounded by a fence, and was under military rule until 1966.

In the 70s and 80s Shlomo Lahat (Chich), then mayor of Tel Aviv, openly declared a policy to Judaize Jaffa. This policy included the demolition of hundreds of houses, mostly in Ajami. The construction waste that was left, along with construction waste from the entire area was deposited onto a two-kilometers long stretch of beach in Ajami. The Israeli Supreme court stopped this activity in 1984, but it was too late to save the beach of Jaffa.

The current plan is to turn the garbage mountain into a beautiful park, and to restore Ajami to its prime days. Of course, Ajami’s location, its gravel hills overlooking the sea, and its high-end real estate prospects, assures that no one has any intention of leaving it to its original inhabitants. Even today you can see more and more huge mansions built by wealthy Jews, pushing up real estate prices and slowly pushing out the poor Palestinian population.

The “coincidental conjunction” between the city’s ambitious plans for cleaning out Ajami, mainly the restoration of the Ajami beach stretch and the wholesale issuing of demolition orders should leave no one in any doubt – a new Israeli campaign of ethnic cleansing is in the making.