Hebron quieter on Day 5 of IOF invasions into H1

Today IOF soldiers occupied the roofs of three high buildings overlooking the Bab al-Zawiyya market area in Palestinian controlled Hebron (H1). For the fifth day in a row soldiers have been entering this busy commercial part of the southern West Bank town. Their presence in the past few days has sparked clashes with local Palestinian youth resulting in arrests and injuries due to tear gas and rubber bullets.

At around 4 pm a group of six soldiers used one of the buildings at the top of King Hussein Street and al-Adel street to shoot teargas at groups of young Palestinians.

They also threw down sound bombs and pointed their guns towards the public. Local youth started to throw stones , fireworks and petrol bombs towards checkpoint 56, leading to the Tel Rumeida area. Another group of six soldiers went through the checkpoint and took firing positions behind concrete blocks. 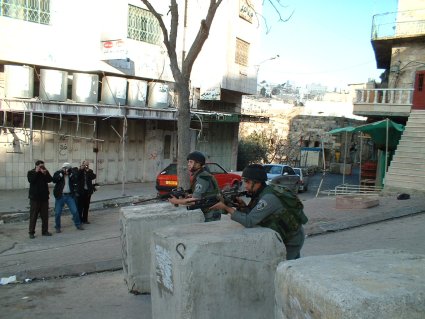 After all Palestinians had fled from the market area the soldiers retreated into Tel Rumeida.