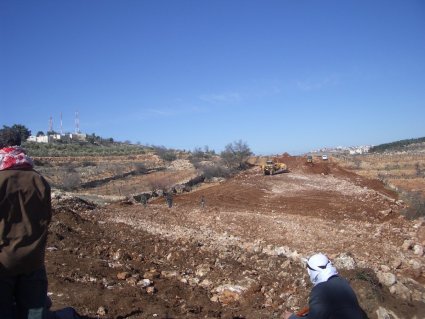 Around 9 this morning IOF bulldozers and dozens of soldiers invaded the land of Umm Salumuna and Wadi Annis villages south of Bethlehem to raze land for the Apartheid Wall. The wall is being constructed east of the illegal Efrat colony and will annex 700 acres of village land containing olive and almond trees, and grape vines.

As happened several weeks ago when the IOF arrived, villages decided to resist the bulldozers from the outset and tried to blockade them with their bodies. This time the IOF arrived with a warrant from an Israeli court authorising the theft of the land. The confiscated land belongs to the family of Ali Khader Issa Taqatqa.

Some of the 75 villagers resisting the destruction of the land were badly mistreated by the IOF who beat them with rifle butts and fired tear gas at them. Ali Mosa Wahre (28) was violently thrown to the ground by IOF soldiers and suffered a broken hand. Mostafa Yosaf Taqata (25) was badly hurt by a rifle butt blow to his chest by IOF forces and was taken away by an ambulance for treatment.

After the bulldozers had managed to flatten village land, creating a lenghty visible footprint for the Wall from the horizon, villagers prayed on the land. The IOF left soon after.