Today in Um Salamuna, Palestinian, international and Israeli activists gathered together on the recently bulldozed land of the village to hold prayers and protest against the confiscation of the land. In other words, it’s business as usual in the West Bank, nothing new here, really. It’s the same story in village after village since construction began on the wall 5 years ago, only the names of villages and families affected change.

On January 2nd, the village of Um Salamuna was greeted by IOF bulldozers which began bulldozing their grape vines to clear the way for the apartheid wall but were met with resistance from villagers. The villagers have filed a petition in the Israeli court to challenge the route of the wall. 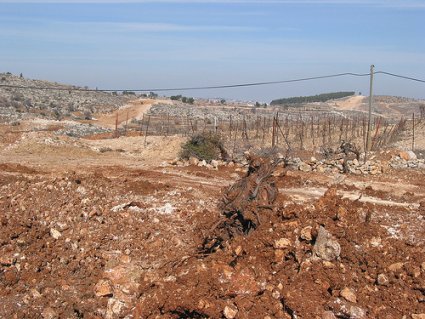 Last Monday the bulldozers arrived in the neighbouring village of Wadi Annis and again villagers tried to protect their agricultural land with their bodies and were beaten by the IOF.

Today was a beautiful, clear, warm day and fortunately the army only graced us with their presence from afar, we could only see them peeping out from behind the trees on an overlooking hill.

Residents from 10 villages around the Bethlehem region came to participate; the wall is affecting all of these villages. These 10 villages will lose 70,000 grape trees and 1000 olive trees.

The villagers are requesting help from Israeli and international activists in order to help them retain their source of income. Many families depend 100% on agriculture to exist.

These are people who have depended on agriculture as their only income for generations. Taking their land will cause them to be dependent on international aid.