Bulldozers belonging to Israeli-annexed Jerusalem’s municipality demolished a four story residential building belonging to Mohammad Mahmoud Al Aemes. Israeli forces used the pretext of building a street for a settlement in destroying the Sur Baher neighborhood home. But they did not finish on Monday, leaving half for today.

Several months prior to demolition foreign solidarity activists camped out in the building in hopes of saving it, but to no avail. At 8:30 in the morning yesterday Israeli forces came from all directions using several means, including horses, to enter quickly.

They attacked neighbors and residents, beating all family members in the building with batons and rifle butts. The father of the homeowner, 60 year old Mahmoud Al Aemes, has a fractured neck while his 35 year old son in law, Abu Zaid Awadullah has a broken hand. The Israelis detained them without allowing treatment.

When the Israeli soldiers and bulldozers arrived some members of the family rushed to the Municipal Court to appeal the decision to destroy their home. The demolition was extended until 11:00 until the family paid 70,000 shekels, however the Israeli Supreme Court did not respond to the appeal and instead insisted on the demolition saying that it would serve as a “lesson to all violators in the district.”

The bulldozers demolished the Palestinian home without allowing the families to remove all of the personal items, furniture, appliances and electronics. The total cost to build the four-story residential building in 2001 amounted to two million shekels. Each floor had two apartments. Mahmoud Al Aemes lived with his wife and four children on the first floor since 2005. On the second floor was his brother Saber and his wife and three children. The third floor housed a family of five and the fourth a family with seven daughters. In the other apartments were a university student and a family of seven.

Al Aemes received a demolition order in 2005 and immediately filed an appeal in three municipal courts, and in the central and high courts. They paid between 10 and 30 thousand shekels each time to stay the demolition and several lawyers were on the case. The Jerusalem Municipality refused to grant a building permit at each request. The area is being taken for a settlement.

the nearby Har Homa colony, which has stolen much of Sur Baher’s land 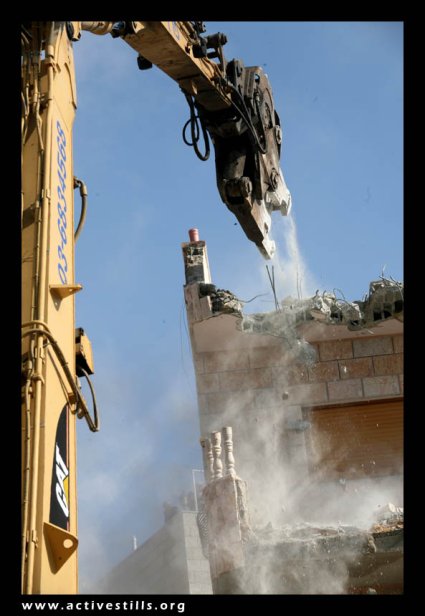