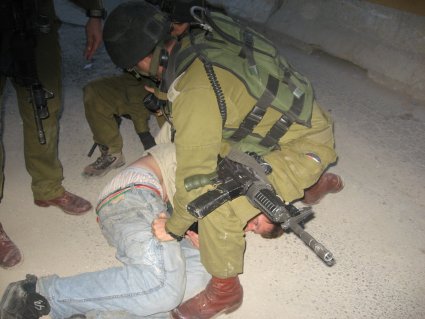 On Saturday at 4pm a human rights worker based in Nablus received a call from some fellow HRWs at Huwwara checkpoint, that hundreds of Palestinians including a mother with a sick child weren’t being allowed through after the checkpoint had been closed.

When the HRW arrived there were hundreds of people waiting to pass through the illegal Israeli checkpoint. A middle aged woman was pleading with soldiers to be able to pass as she was cradling a sick child who required treatment.

The HRWs attempted to ask the Israeli soldiers the reason for the closure and whether it would be possible for the women and child to pass through, but his pleas were met with stony silence. After further inquiries, the soldiers informed the HRW that if he didn’t go away he would be “punished”. The woman continued to remonstrate with the soldiers in the presence the HRW, at which point the soldiers wrestled him to the ground and handcuffed him.

During the arrest the HRW was lighly injured and his camera was damaged. He was then detained in a small holding cell for an hour before being taken to Ariel settlement police station where he was questioned and detained for a further 4 hours. 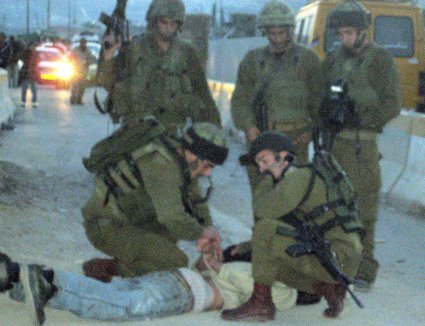 Police claimed that the HRW had struck one of the soldiers and asked him to sign a document promising never to visit Nablus again. The aggrieved HRW refused, pleading wrongful arrest and physical abuse. He was then asked to sign a document promising not to argue with Israeli soldiers at Huwwara checkpoint for a period of 15 days, before being released without charge at approximately 10pm.

Huwwara checkpoint is notorious for long unexplained closures, which have become more common of late. In the last few weeks Palestinians have had to spend up to 2 hours waiting to pass through. As well as Huwwara checkpoint, Palestinians have to travel through other permanent and temporary checkpoints on their way to Ramallah, resulting in journey times of up to 5 hours for a journey of 20 miles, if they are allowed through them.

There are currently 72 permanent military checkpoints throughout the West Bank along with at least 25 temporary and flying checkpoints set up randomly by Israeli occupying forces.

Checkpoints can be a major deterrent for Palestinians on any road because of the extensive delays, security searches, as well as physical and psychological abuse by Israeli soldiers.

The checkpoints and Israel’s closure policy are often used as a means of enforcing collective punishment on the inhabitants of a certain area, or even the entire population of the Occupied Palestinian Territories .Collective punishment is illegal under international law.

The system of Israeli checkpoints in the Occupied Palestinian Territories violates international humanitarian law as codified in the Fourth Geneva Convention of 1949.