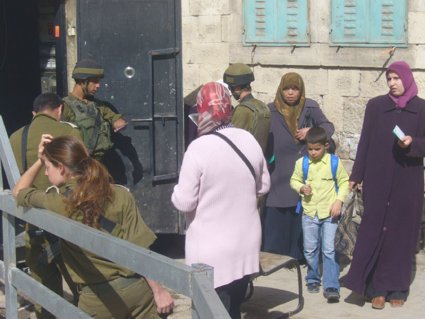 8:15 a.m., a human rights worker who happened to be walking through the Tel Rumeida checkpoint, discovered that 12 teachers and the headmistress from Qurtuba School were being refused entry at the checkpoint. At this time there were two observers from EAPPI present.

At 8:25, after a lot of argument, the soldiers at the checkpoint allowed the headmistress to go through in order to phone the DCO from the school. When the headmistress, Reem Sharif, returned she said that in September the teachers had also been held up every day for two hours so that the school session was almost over by the time they were allowed to pass the checkpoint. (Over the last year or so, there have been many incidents of soldiers arbitrarily preventing the teachers from reaching the school.)

Since then the teachers have been on strike. They had decided to return without salaries and were allowed through the checkpoint on Tuesday, October 31.

On the Tuesday, a settler came and spoke to the headmistress expressing anger that the school was open again. The settler asked whether the school would be open the following day and was told that it would be.

The headmistress suspects that the settler made a complaint and that is why the teachers were not allowed to pass the checkpoint.

Contacts made by the HRW:
8:45 Machsom Watch and the DCO. The DCO said he would take care of the problem. At 9:00 a.m. the police arrived and after a lot of discussion they didn’t handle the problem and drove away. AT 9:30 the DCO said the problem would be solved within a few minutes. At 9:50, Amir, an officer from the DCO, said that three of the teachers were not on the list of the teachers eligible to be allowed through. The teachers said, that no one had asked for their I.D. So then Amir and Headmistress Sharif worked on checking and amending the list. 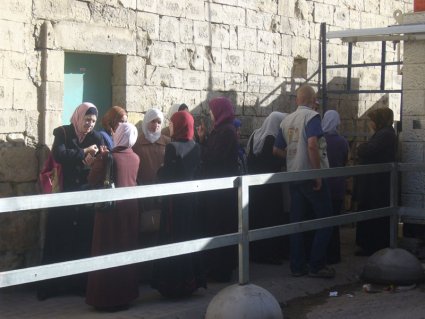 At 10:05, the teachers had their I.Ds checked and were allowed through the checkpoint.

The original HRW program for the morning had been to meet at 9:00 a.m. at the home of a Palestinian family living near the Tel Rumeida settlement but the incident with the teacher pushed the time of meeting back to 10:15. The family members said they were ok with this. So, at 10:15 three HRWs met at the family home and spent the morning and part of the afternoon picking olives close to the military watchtower. Then they had lunch and an extended visit with the family. Two TIPH teams visited the olive picking site during the morning to make sure there was no trouble.